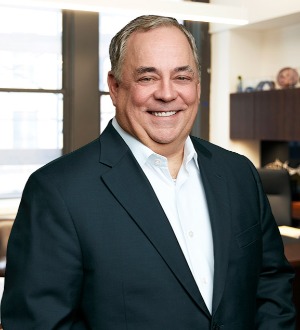 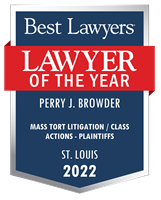 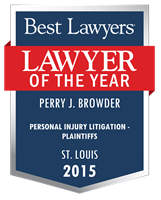 Shareholder Perry Browder is head of the Asbestos Department at Simmons Hanly Conroy. He has worked for more than 30 years helping numerous families resolve hundreds of million dollar-plus cases.

He started at the firm in 2001 and played a key role in helping the firm develop a national reputation. Within a few years, he had successfully secured one of the largest asbestos verdicts in the country, a $250 million verdict against U.S. Steel.

Today, Perry manages the firm’s more than 50 asbestos attorneys who are organized into multiple asbestos trial teams. He oversees all asbestos cases to ensure they are handled in an efficient manner that maximizes results and minimizes hassle for clients and their families, so they can focus on their health.

“People hire the firm for our expertise and our compassion,” Perry said. “Even though we’re one of the largest firms in the country, we treat our clients like family. We are sensitive to their needs and at the same time we have a proven track record of getting results.”

In the case against U.S. Steel, Perry represented Roby Whittington, a 70-year-old retired steel worker, who was diagnosed with mesothelioma after working 30 years for the company. The case eventually went to trial and an Illinois jury awarded a $250 million verdict in favor of Mr. Whittington. While Perry spent hours building the case, he credited the large result to Roby.

“The case was won because Roby was a good man who did everything he was supposed to,” he said. “U.S. Steel angered the jury in that they didn’t take the steps to protect him, even though they knew the hazards of asbestos.

”The verdict was important, Perry said, because it sent the message to large corporations that they can’t treat people as disposable resources and get away with it. It’s a message Simmons Hanly Conroy has continued to send as it’s recovered more than $9 billion in verdicts and settlements on behalf of clients.

A veteran of hundreds of asbestos cases, Perry has developed an in-depth understanding of asbestos law and the important role research plays in the discovery process.

“I enjoy my job. I enjoy digging through products and documents from 40 to 50 years ago. It’s an opportunity to play historian and detective and to piece together the puzzle that caused our clients’ injuries into the best case possible,” Perry said.

Under Perry’s direction, the firm has developed extensive resources, including an in-house medical department, a dedicated research department, a nationwide network of medical experts and more.

“Hiring a law firm with the resources and ability to stand up to these corporations that have endless funds and legions of attorneys to defend them is so important,” Perry said. “It keeps families from being overwhelmed and ensures their rights are enforced."

Perry grew up in Chicago and graduated from Valparaiso University School of Law in 1988. After working at Simmons Hanly Conroy for nearly eight years, he became a member of the leadership committee in 2009.

As a leader in asbestos litigation, Perry has been asked to speak at multiple asbestos litigation conferences including Perrin, PALS and more. He has helped the firm grow from less than 10 attorneys to nearly 70 and accept more asbestos cases on an annual basis than any other firm in the country.

Since 2013, Perry has been included in the “Best Lawyers in America” list in the area of personal injury litigation, compiled by U.S. News & World Report, and in 2015 was recognized as the “Lawyer of the Year” in St. Louis. He has also been named an Illinois Super Lawyer since 2011 and received a 5.0 AV-ranking from Martindale-Hubbell.