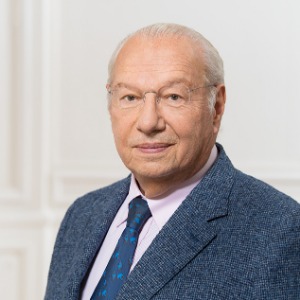 Navigate to map location for Paul Tauchner Visit the website for Paul Tauchner at https://www.vossius.eu/en/attorneys-professionals/profile/dr-paul-tauchner/?L=940
Your comment has been submitted!
We have encountered an error and are unable to process your comment at this time. Please refresh the page and try again later.
Add Comment
In making your comments, please do not refer to a pending legal matter.
Share My Profile
Post on Social

Dr. Paul Tauchner graduated in chemistry at the University of Munich. He made his Ph.D. at the Institute of Organic Chemistry in 1974. After completing his training in the field of intellectual property protection in the firm of VOSSIUS & PARTNER, he was admitted to practice as a German Patent Attorney (Patentanwalt) in 1977, a European Patent Attorney in 1978 and a European Trademark Attorney in 1994. Dr. Tauchner has been a partner in the firm since 1980.

He works predominantly on opposition and litigation cases as well as in freedom-to-operate and validity opinion matters. He was involved i.a. in the Captopril, Terfenadine (prodrug) and Torasemide litigation matters, the Taxol and Viagra EPO opposition cases and the Olanzapin validity defence.

Dr. Tauchner is a member of the Editorial Board of „Patent World“ and the author of various papers concerning patents in chemistry and the patentability of pharmaceutical substances, patent litigation and invalidation proceedings. He also frequently gives lectures and holds seminars on European and German patent topics in Japan, the U.S.A., the United Kingdom, and Germany.