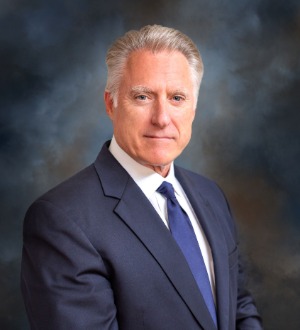 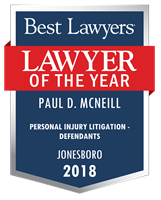 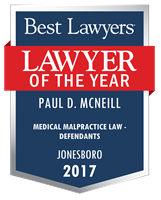 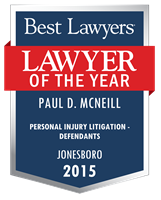 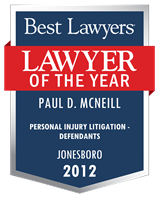 Partner of RMP LLP, Paul McNeill was born in Little Rock, grew up in Pine Bluff and attended the University of Arkansas in Fayetteville. He earned a Bachelor of Science in Business Administration in 1976, after which he received his Juris Doctor, with high honors, in 1979. During law school, he was a member of the Arkansas Law Review and the Appellate Advocacy Team.

Paul has been selected as a Member of the “Nation’s Top One Percent” by the National Association of Distinguished Counsel. He was chosen for demonstrating the highest ideals of the legal profession, having been vetted by a research team, a blue ribbon panel of attorneys, and a judicial review board. Paul has also been chosen by his peers to membership in the American College of Trial Lawyers and American Board of Trial Advocates. He has also been selected as one of the Best Lawyers in America in the areas of medical malpractice and personal injury litigation annually since 2003, The Best Lawyers in Arkansas by the Arkansas Times since 2002, Super Lawyers of the Mid South since 2006, as well as to the Top 50 Lawyers in the Memphis Area since 2006. In 2008 he was selected to the “Top Lawyers in America” as featured in the All About You magazine in the area of medical malpractice as well as being named one of the Top 100 Trial Lawyers by the American Trial Lawyers Association. In 2005-2006 he was selected as the Outstanding Defense Attorney in Arkansas by the Arkansas Association of Defense Counsel. His current areas of practice include medical malpractice, products liability and litigation.

Through 2014, Paul has tried 171 jury trials as “first chair” both in State and Federal Courts. He is also a frequent speaker at seminars on trial matters. While his practice is predominantly focused on representing defendants, he also handles plaintiff’s cases (with the exception of medical negligence). His success in these areas resulted in his selection as one of the “Leading Plaintiffs Lawyers in America” by Lawdragon in 2007 as well as the Million Dollar Advocates. He has obtained seven-figure verdicts and settlements that include: 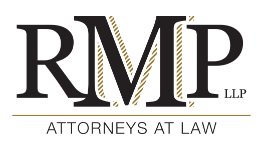