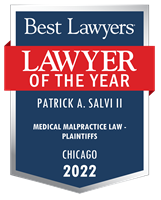 Mr. Salvi has obtained many record-breaking jury verdicts on behalf of his clients. The following are cases he has tried to verdict:

Mr. Salvi has also successfully obtained a number of multi-million-dollar settlements, including:

In recognition for his outstanding legal work, Mr. Salvi has been named to the Illinois Super Lawyers List since 2014 and was selected as a “Rising Star” by Super Lawyers in 2012 and 2013. In 2019, he was recognized as a Leading Lawyer by Law Bulletin Media, a distinction given to less than five percent of all lawyers licensed to practice in Illinois. Every year since 2017, he has been listed in Lawdragon’s 500 Leading Lawyers in America, an elite guide in the legal profession. In addition, Mr. Salvi has been recognized by Best Lawyers in America in the areas of Personal Injury Litigation and Medical Malpractice Law.

Mr. Salvi has received many additional honors, including:

Mr. Salvi is a board member of Legal Aid Chicago, an organization that provides free legal services to people living in poverty. Mr. Salvi has also been a speaker at Kellogg’s School of Management’s MBA business law class and at Notre Dame Law School’s “Personal Injury Litigation” class.