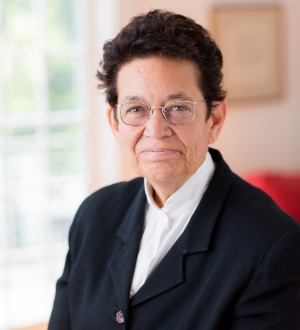 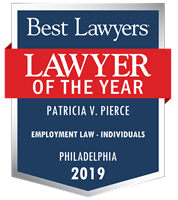 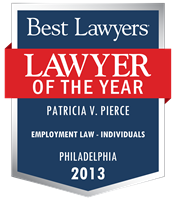 Patricia V. Pierce is a partner in the Philadelphia based law firm of Greenblatt, Pierce, Funt and Flores, LLC (GPFF). Ms. Pierce heads the Employment Law Practice at the firm and serves as a principal in the firm’s Corporate Investigations practice. Ms. Pierce has represented individuals and groups of workers who have suffered employment discrimination and workplace harassment litigating individual and class action employment lawsuits, as well as employee benefits cases in state and federal courts in California, Delaware, Maryland, Minnesota, Wisconsin, Tennessee, New Jersey and Pennsylvania. Her practice includes multi-party wage and hour matters and Consumer Fraud litigation. Ms. Pierce frequently provides advice to executives in negotiating employment contracts and in managing sensitive trade secret and restrictive covenant/non-compete issues.

In addition, Ms. Pierce is regularly engaged by individuals, small businesses and nonprofit corporations to provide advice and counsel in litigation avoidance and the defense of all types of employment actions, including the defense of federal and state discrimination claims, whistleblower and wrongful discharge matters, and contract disputes. In her role as counselor, Ms. Pierce advises corporate clients on a host of personnel related matters including workplace policies and procedures, performance management best practices, including discipline and termination policies and decisions, and the conduct and content of supervisory training.

In addition to building on-going relationships with individual and corporate clients, Ms. Pierce has been sought out by colleagues to conduct independent in-house investigations of claims of discrimination as well as corporate malfeasance and fraud. Recently, Ms. Pierce has been engaged by insurance companies and law firms to provide expert advice and testimony on claims of attorney malpractice employment/EEO best practices, and has served as a neutral mediator.

Throughout her forty year career, Ms. Pierce has tried hundreds of matters to verdict, including jury and bench trials and has been successful in handling every kind of employment litigation matter including age, gender, hostile work environment, race, national origin and religious discrimination matters as well as claims brought by whistleblowers under state and federal laws.

In addition to managing her individual and class employment litigation practice, Ms. Pierce has teamed with GPFF’s managing partner, Ron Greenblatt, to co-manage the firm’s extensive civil rights practice handling claims of police misconduct that have resulted in wrongful arrest, prosecution and incarceration as well has traumatic injury. Since joining GPFF in 2011, Ms. Pierce and Mr. Greenblatt have successfully represented GPFF’s clients in state and federal court actions that have resulted in recoveries of millions of dollars.

Ms. Pierce has been admitted as a Fellow of the prestigious American Bar Association’s College of Labor & Employment attorneys. Ms. Pierce was honored by her alma mater, Rutgers School of Law-Camden’s Black Law Students Association with the “Champions for Social Justice and Equality Award. Ms. Pierce has been listed each year among the Best Lawyers of America since 1995. In 2013 Best Lawyers named Ms. Pierce its “Attorney of the Year” in the practice area of Employment-Individuals. Ms. Pierce has consistently been named a Pennsylvania Super Lawyer since 2004 and has repeatedly been named one of Pennsylvania’s Top 50 Women Lawyers. She has also earned the preeminent AV rating from Martindale-Hubell for both her legal ability and ethical standards. Ms. Pierce has lectured extensively on issues of attorney ethics and has served as a Senior Disciplinary Committee Member for the Pennsylvania Supreme Court.

Ms. Pierce is a frequent author and lecturer for the ABA-ALI Continuing Legal Education Program; the Pennsylvania Bar Institute and the National Employment Lawyers Association where she served on NELA’s 2011-2012 Convention Committees and continues to act as a moderator and presenter. Ms. Pierce was a Visiting Professor of Law at Santa Clara University in the mid-1990s where she founded an Employment Law Clinic and taught Evidence. In Philadelphia, Ms. Pierce has served as an Adjunct Professor at Temple’s Beasley School of Law and taught law students in Temple’s Introduction to Trial Advocacy and Advanced Trial Advocacy programs as well as practitioners in Temple’s prestigious LLM Trial Advocacy program. Ms. Pierce also taught Employment Law Practice and Procedure at Rutgers School of Law, her alma mater and taught trial advocacy for the National Institute of Trial Advocacy, which named her as a distinguished faculty member. Ms. Pierce has published a law review article which analyzed the pedagogical experience of an innovative clinical program she spearheaded : The Santa Clara Experiment: A New Fee-Generating Model for Clinical Legal Education, with Ridolfi, 3 CLINICAL LAW REVIEW 439-470 (1997). Ms. Pierce earned her bachelor’s degree from Rutgers, with High Honors and Distinction in Political Science and a juris doctor from Rutgers School of Law with High Honors where she was a 1974 Rutgers Community Scholar.