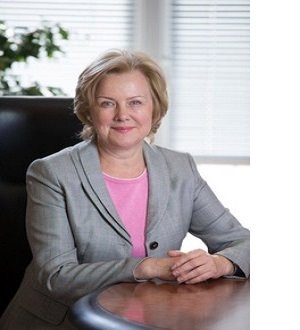 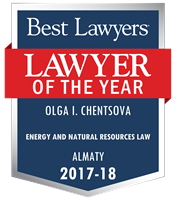 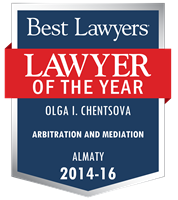 After graduating from the law department of Kazakh State University, she was invited to work as a professor of civil, economic and Roman law at the University. Ms. Chentsova earned her Doctor of Law degree in 1990. Thesis subject “Civil Sanctions Mechanism in Capital Construction”. In 1990–1991, she worked as an advisor at the Supreme Arbitration Court of the Republic of Kazakhstan. From 1991 to 1993, Ms. Chentsova was heading the contract and legal department of Kazmetallexport, a state-owned foreign trade company. Since AEQUITAS establishment in 1993, she has been its Managing Partner.

Ms. Chentsova has been advising major global oil and mining companies and leading local companies on issues pertaining to civil, corporate and environmental legislation, investment, subsoil use, litigation and arbitration for more than twenty years.

Ms. Chentsova was on several governmental working groups to develop important commercial legislative acts of the Republic of Kazakhstan (including the Civil Code, Foreign Investment Law, Petroleum Law, etc.). When engaged by the Scientific Private Law Research Institute under the Kazakh State Law Academy (Private Law Center), she participated in the discussion and preparation of proposals to improve the civil legislation, including the Civil Code, the Subsoil Law and Petroleum Law and a number of other statutes and regulations.

For many years Olga Chentsova has been recommended as a leading lawyer in Energy, Natural Resources, Oil & Gas, Dispute Resolution and M&A areas by a number of reputable international editions, such as Chambers & Partners, The Legal 500 and Who’s Who Legal.

Her articles on various aspects of commercial law and subsoil legislation of the Republic of Kazakhstan are regularly published in foreign and local magazines and periodicals.

6 The Best Lawyers in Kazakhstan™ awards

Recognized in The Best Lawyers in Kazakhstan™ 2017-18 for work in: