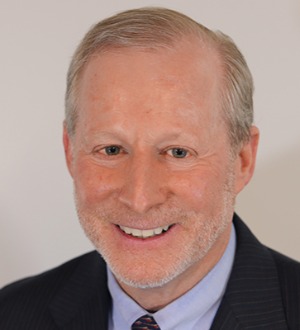 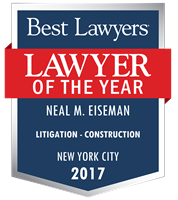 For 2022-23, Neal is the President of the College of Commercial Arbitrators, an invitation-only fellowship of nationally and internationally recognized commercial arbitrators.

Neal serves on the Panel of Construction Arbitrators of the American Arbitration Association (“AAA”), including its Construction Arbitration Master Panel. He is a member of the Panel of Arbitrators for the International Centre for Dispute Resolution. He is also a member of both the AAA’s Construction Master Mediation Panel and the Panel of Mediators of the International Centre for Dispute Resolution. Several times, Neal has taught an intensive five-day AAA mediator training program entitled “Essential Mediation Skills for the New Mediator.”? Super Lawyers named Neal as one of the “Top 100 Lawyers” across-the-board for the New York Metropolitan Area in 2016, 2017, 2018, 2021 and 2022. He is a Chambers Band 1 Consruction Mediator. In 2017, Best Lawyers selected Neal as the “Lawyer of the Year” in New York City for “Litigation-Construction Law.” Neal is a Fellow of the Chartered Institute of Arbitrators, as well as a Member of the National Academy of Distinguished Neutrals. He is also a Fellow and Board Member of the College of Commercial Arbitrators, an invitation only fellowship comprised of nationally and internationally recognized commercial arbitrators.

He is a regular guest speaker at events held by the American Bar Association (ABA), the AAA and various construction trade associations. In April 2021, Neal spoke at the ABA’s Section on Dispute Resolution’s Spring Meeting on “Post-Pandemic Arbitration: Old School or New Age?”. Also in April 2021, on behalf of the AAA, Neal spoke to newly admitted arbitrators on "Arbitrator Fundamentals and Best Practices.” November 2020, Neal hosted an AAA Roundtable on “Best Practices on Virtual Hearings.” In October 2020, Neal discussed “Non-signatories to Arbitration Agreements” at the College of Commercial Arbitrator’s annual meeting. Neal spoke at the 2019 Construction SuperConference in Los Angeles on “What Counsel and Witnesses Do that Drive Arbitrators Nuts.” In May 2019, he spoke at the ABA Section of Litigation Conference in New York City on “A Delicate Balance: Arbitrating Your Client’s Complex Commercial Case Without Sacrificing Speed, Efficiency and Cost-Savings.” In April 2019, he spoke at AAA's Annual Construction Conference in Miami on “Don’t Forget the Damages—You Can’t Win on Entitlement Alone.” Also in April, 2019, Neal spoke at the ABA Section of Dispute Resolution’s Annual Conference in Minneapolis, MN on “How to Save the Parties From Themselves in Construction Arbitrations.” Recently, Neal lectured at the 2017 Construction SuperConference on “Streamlining Your Arbitration: How to Avoid Reliving that Construction Project Brick by Brick,” in Las Vegas, Nevada. In April 2018, Neal spoke at the annual ABA Section of Dispute Resolution Conference in Washington, D.C. on “Handling Multi-Claim Construction Disputes: Practical Tips.” In October 2018, he spoke on behalf of the American Arbitration Association in New York City on “Seeking Efficiency and Economy in Arbitration: The Attorney’s Role.”

In the recent past, Neal (i) appeared before more than 200 New York City School Construction Authority project managers and spoke about dispute resolution; (ii) spoke as part of a national AAA webinar on “The Overuse of Discovery in Arbitration Proceedings”; (iii) lectured about project delay and scheduling at the ABA’s New York Regional Program entitled “The Fundamentals of Construction Law”; (iv) participated on a panel of experts on “New York’s Prompt Payment Act: An Underutilized Tool for Getting your Client Paid” at New York County Lawyers Association; (v) spoke before the New York County Lawyers Association on “The Use of ADR in Construction Cases: What the Industry Forms Say about ADR”; and (vi) lectured at the ABA’s Annual Litigation Conference about “Best Practices to Maximize the Benefits of Your Next Arbitration.” He also recorded Sound Advice segments for the ABA’s national website.

Prior to launching Eiseman ADR, in a decision that received national coverage, Neal represented a number of unpaid telecommunications companies who sued Wells Fargo Bank in the U.S. District Court of the Eastern District of New York for the diversion of monies funded by certain public entities to pay for the subcontractors’ work. The lawsuit, certified as a class action, was tried before Judge Leonard D. Wexler who issued a decision awarding the subcontractors 100% of their claims totaling, including interest, $2.7 million. In the recent past, Neal obtained a $1 million-plus arbitration award, which included attorney’s fees, against the sponsor of a Manhattan condominium project on behalf of various unit owners who claimed the fair market value of their apartments had been reduced by virtue of the sponsor’s actions. He also obtained a unanimous reversal of an adverse decision of a New York federal trial court when the Second Circuit Court of Appeals held that a “Residential Exclusion” rider in a comprehensive general liability insurance policy does not permit a contractor’s insurance company to disclaim coverage because the project in question involves the construction of a residential condominium project.

Neal writes extensively about construction and commercial issues for various legal publications. In prior years, Neal was the author of The Overview on New York Construction Law for Thomson Reuters Practical Law. Neal is a co-author of the “Claims and Disputes” chapter of the ABA’s 2017 A201 Deskbook. He is also a co-author of the chapters on “Construction” and “Arbitrator Fees and Expenses” in the College of Commercial Arbitrators’ Guide to Best Practices in Commercial Arbitration (4th ed., 2017).

On April 13, 2018, Neal wrote a column for the New York Law Journal entitled Third-Party Funding of Lawsuits Permeates Legal Landscape. It examined some of the practical and ethical questions surrounding third-party financing of legal claims, including the potential for bias, discovery and influence on trial and arbitration counsel. On June 19, 2018, Crain’s New York Business published Neal’s article on the effect that a recent U.S. Supreme Court decision could have on workers claims for unpaid wages. In 2015, his opinion piece on how proposed legislation in New York undermines the arbitration of business disputes appeared in the New York Law Journal. In 2015, the Harvard Negotiation Law Review published his article, Stiffing the Arbitrators: The Problem of Nonpayment in Commercial Arbitration. In 2013, Neal co-authored an article entitled “A Tale of Two Lawyers: How Arbitrators and Advocates Can Avoid the Dangerous Convergence of Arbitration and Litigation” for Cardozo Law Schools Journal of Conflict Resolution.