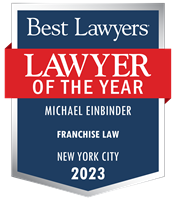 Michael is a frequent speaker at events hosted by the American Bar Association Forum on Franchising, the International Franchise Association Legal Symposium, and other venues. Michael has also authored numerous publications and articles for the American Bar Association and other organizations. Michael’s next writing contributions will be for two ABA Forum on Franchising publications, releasing in 2020.In addition to his representation of his clients in the matters described above Michael is an American Arbitration Association arbitrator.