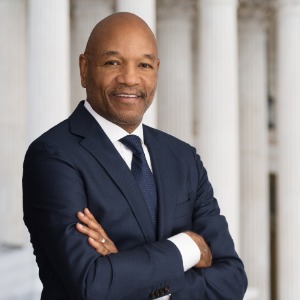 Navigate to map location for Michael Battle Visit the website for Michael Battle at https://btlaw.com/en/people/michael-battle
Your comment has been submitted!
We have encountered an error and are unable to process your comment at this time. Please refresh the page and try again later.
Add Comment
In making your comments, please do not refer to a pending legal matter.
Share My Profile
Post on Social

Criminal defense lawyer and civil litigator Michael Battle is focused on white collar criminal matters. Having previously served as a prosecutor and judge himself, Michael understands their perspectives and designs compelling arguments that have the best chance of defending his clients and mitigating their exposure to prosecution.

After leaving public service for private practice, Michael has counseled numerous clients on cases involving the Foreign Corrupt Practices Act (FCPA), healthcare fraud, the False Claims Act (FCA) and disadvantaged business regulatory violations, among others. A proven advocate with keen instinct for effectual negotiation, Michael has defended businesses and individuals faced with high-stakes investigations and claims by drawing upon his broad and multi-dimensional understanding of how government agencies prioritize policy and enforcement objectives.

Prior to joining the firm, Michael held several distinguished public service posts. He served as director of the U.S. Department of Justice’s Executive Office for U.S. Attorneys, where he oversaw all 93 U.S. attorneys and acted as a liaison with other federal agencies. He also sat on the Attorney General’s Subcommittee on Civil Rights, U.S. Sentencing Guidelines and White Collar Fraud, as well as helped create a U.S. task force to prosecute fraud in the aftermath of Hurricane Katrina. Michael also was U.S. attorney for the Western District of New York (2002-2005) and was one of the first three federal defenders in the Western District of New York. Notably, Michael spent six years as a judge on the Erie County (New York) Family Court bench, during which he decided hundreds of family law cases.

Michael’s first-hand experience and credibility as a prosecutor gives him insight into what is important to prosecutors and how they think, and the policies and decisions around what types of criminal activity they may pursue. As a result, Michael is able to position his clients as favorably as possible, anticipating what the opposition will do next and using that knowledge to leverage his client’s position.

Having also served as a judge for a number of years, Michael believes in the importance of fact versus argument, which serves as his compass when representing clients faced with even the most precarious challenges and potentially devastating consequences. Michael knows how to identify and analyze all the facts of a case to create a comprehensive and multi-dimensional defense strategy. Always prepared, diligent, calm, cool and collected, Michael is a proven communicator with a honed ability to observe and synthesize what is going on around him, as well as how to identify and create advantage as a result of that skill.

243 The Best Lawyers in America® awards

67 Best Lawyers: Ones to Watch® in America awards