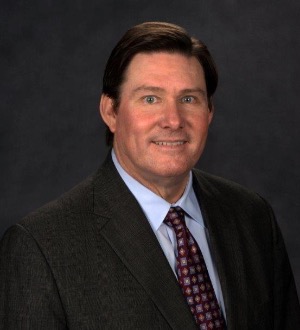 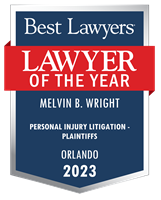 MELVIN BOWEN WRIGHT was born in Albany, Georgia on August 1, 1959 and was raised on a family farm still in operation in Warwick located in Worth County, Georgia. He moved to Central Florida in 1985, is married and has two children. He received his Juris Doctor degree in 1985 and was admitted to the State Bar of Georgia in 1985 and the Florida Bar in 1986. Mr. Wright is also licensed to practice law in Tennessee. Mr. Wright is also a member of the Supreme Court Bar, the District Courts for the Middle and Northern Districts in Florida and the Eleventh Circuit Court of Appeals.

Mr. Wright began the practice of law in 1985 in Orlando with an emphasis in wrongful death and personal injury litigation and represented both the injured and the insurance industry until 1993. He now exclusively handles cases of serious personal injury and death for accident victims. Mr. Wright has substantial experience in all types of personal injury and wrongful death litigation including automobile accidents, on the job injuries, childcare negligence, drowning and other premises liability, cases involving negligent security at retail establishments, and medical malpractice. Mr. Wright has extensive experience in nursing home and other institutional abuse and neglect cases, having led a team of nursing home neglect and abuse attorneys at another Florida law firm and having lectured nationally at seminars on institutional abuse and neglect cases from 1997 to 2004. Mr. Wright has experience in representing clients in mass tort cases, including pharmaceutical products and compounded drugs.

Mr. Wright was nominated and selected by his peers as a member of The Best Lawyers In America beginning in 2019 in the 25th Edition. For more than 30 years, Best Lawyers has been regarded by both the profession and the public as the most credible measure of legal integrity and distinction in the U.S.

Since 1999, Mr. Wright has also been board certified by the National Board of Trial Advocacy and the National Board of Civil Pretrial Practice Advocacy of the National Board of Legal Specialization and Certification, organizations accredited by the American Bar Association to certify attorneys in the specialty of Civil Trial Law and Civil Practice Advocacy. Board certification by the NBTA also requires passing an examination, favorable peer review, and substantial experience in a career concentrating in civil trial law. Less than 1% of attorneys nationwide are board certified in civil trial advocacy. He is a Board Certified Civil Practice Advocate and a Board Certified Civil Trial Advocate. Beginning in 2009-2010 Mr. Wright has also served as a member of the NBTA advisory committee. As of 2019, Mr. Wright has achieved Senior Specialist status, having been board certified in civil trial practice since 1999.

In 2018, Mr. Wright was inducted as a Fellow of the International Society of Barristers (ISOB). The ISOB was created in 1965 and is dedicated to preserving trial by jury, the adversary system and an independent judiciary. The emphasis of the ISOB is on warm fellowship among professionals, without regard to their orientations as plaintiffs’ or defendants’ advocates, to promote good will, ethics and excellence in advocacy and in the role of litigation in society.

In 2013, Mr. Wright was nominated and selected as a member of the American Board of Trial Advocates. He was elected secretary for the Central Florida Chapter of ABOTA in 2015, and he then served as treasurer in 2016, vice-president in 2017 and president in 2018. ABOTA was formed in 1957 by a group of top American lawyers in response to attacks upon the jury system. Today, the preservation of trial by jury in civil cases remains the primary purpose of ABOTA which is a nationwide “invitation only” organization comprised of both plaintiff and defense attorneys. ABOTA seeks attorneys who display skill, civility and integrity, to help younger attorneys achieve a higher level of trial advocacy and to educate the public about the vital importance of the Seventh Amendment. Thomas Jefferson was of the opinion that the right to trial by a jury of fellow citizens was a more important safeguard of personal liberty than the right to vote. ABOTA agrees with Jefferson and is a leader in the fight to preserve and protect your right to a jury trial. ABOTA is dedicated to “Justice by the People.” Mr. Wright is also a Life Fellow of the ABOTA Foundation.

Mr. Wright is an AV Preeminent Peer Review rated attorney by the Martindale-Hubbell Law Directory rating system and a Client Champion Award member. Martindale-Hubbell has been a respected source of authoritative and dependable information about members of the legal community in the United States, Canada and throughout the world for over 140 years. The AV rating is awarded only after Martindale-Hubbell solicits confidential opinions from members of the bar and the judiciary on the legal ability and ethics of the attorney being reviewed for a rating. The “A” rating means that the attorney scored “very high to preeminent” in the category of “legal ability” while the “V”

Board Certified Civil Pretrial Advocate - National Board of Trial Advocacy

Certified by the Florida Bar for over 25 years as a civil trial specialist.