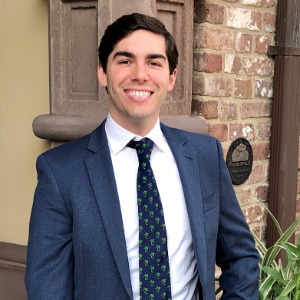 Matthew is from many generations of Lawyers. Some of his first memories were making forts out of file boxes and typing gibberish memos on one of typewriters at his father’s firm. He was born and raised in Myrtle Beach, SC and is a 14th generation Charlestonian on his mother’s side. These traits give him a unique expertise in handling cases throughout the Lowcountry and Grand Strand, and indeed why Matthew picked the name “Lowcountry Law” for his firm. Lowcountry Law focuses primarily on personal injury with a heavy emphasis on assisting claimants in Workers' Compensation claims.

Matthew graduated from The Citadel, The Military College of South Carolina in 2013 with a Bachelor of Science degree in Biology. While at The Citadel Matthew was on the Dean’s List, a member of the Beta Beta Beta Biology Honors Society, Bond Volunteer, Member of the Honor Committee, and an officer on 4th Battalion Staff. Matthew is also a Life Member of The Citadel’s Theta Commission of Kappa Alpha Order and a member of The Loyal Order. In 2021, The Citadel named Matthew its 2021 Young Alumnus of the Year.

After The Citadel, Matthew attended the Charleston School of Law. While in Law School, Matthew was President of the Phi Delta Phi Legal Honor Society, a Senator in the Student Bar Association, an Editor for the Maritime Law Review, Faculty Research Assistant for Professor William G. Merkel, a Pupil of the James L. Petigru Inn of Court, and the Associate Justice for External Competitions for the Charleston School of Law’s Moot Court Board. After Matthew graduated from Law School, he passed the South Carolina Bar with a score that ranked in the top 1% of scores nationally and enabled Matthew to practice in over 37 States and Territories. In addition to South Carolina, Matthew is also admitted to the United States District Court for the District of South Carolina, the United States Bankruptcy Court for the District of South Carolina, pro hac vice in North Carolina. Most recently Matthew was admitted to practice before the United States Court of Appeals for the 4th Circuit.

When not zealously advocating for his clients, Matthew loves to till his extensive garden. A fun fact is that he makes his own Habanero hot sauce from heirloom varieties he grows. He also is an avid genealogist. In this capacity he is the Solicitor for the Sons of the Revolution in the State of South Carolina and a Vice President in the South Carolina Sons of the American Revolution. Among other groups he is also a member of the Society of the Cincinnati, Society of Colonial Wars, and the Huguenot Society of South Carolina. His community outreach and service included being on the Board of Directors for the Stray Dog Society and serving as an Elder at the French Protestant (Huguenot) Church of Charleston.

Above all, Matthew takes the most pride in his legal work. He has been named to the SuperLawyers Rising Stars list from 2020 to present, is a Platinum Client Champion from Martindale-Hubbell, and included in Best Lawyers Ones to Watch.