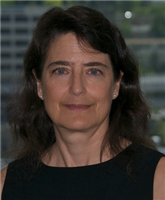 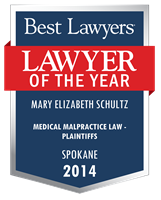 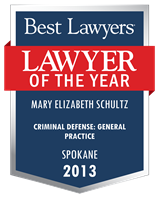 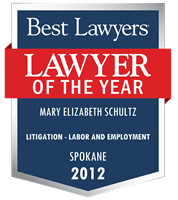 Mary Schultz has obtained some of the largest jury verdicts in the country from Eastern Washington juries in medical/ oral surgery negligence and in employment discrimination cases. She adds to that a recent verdict in favor of four female plaintiffs aagainst a private golf and country club for public accomodation discrimination. This is one of only a handful of such verdicts nationwide. Ms. Schultz has recovered numerous multimillion dollar judgments, verdicts and settlements in both Washington and California for her clients. She has been included annually in The Best Lawyers in America since 2003, rated superb by AVVO.com, is a Charter Fellow in the honorary Litigation Counsel of America, and is included in the National Trial Lawyers Top 100.

2017 Gender discrimination settlement pretrial against the Department of Justice $225,000

2013: Jury verdict for $580,000 for private club discrimination under public accomodation law, with fees, costs and injunctive relief to be determined in
2013: $2,000,000 for hospital negligence,
$1,200,000 for prescription drug negligence as exemplary settlements in medical negligence,

1998 Transactions:Hired as independent consultant to NYSE company to assist with employment issues and litigation defense