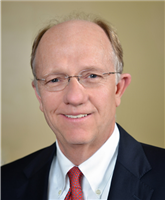 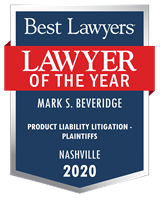 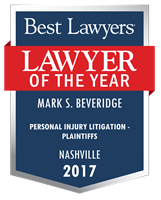 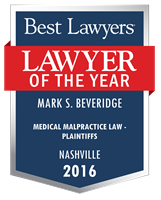 Mark Beveridge is a senior partner at the law firm of Kinnard, Clayton & Beveridge. He received his undergraduate degree from the University of Virginia and his law degree from the University of Richmond/ He spent the first ten years of his legal career as an Assistant District Attorney General in Nashville where he rose to the position of team leader and chief prosecutor in one of Nashville's Criminal Courts. In 1991, he entered private practice. For more than 25 years, Mark has focused on primarily handling cases including medical negligence, birth injury, and other personal injury cases. Mark also serves as Judge of the Belle Meade City Court. He is a member of the Board of Governors of the Tennessee Trial Lawyers Association and is a Fellow of the Nashville Bar Foundation and the Tennessee Bar Foundation. He was appointed by Mayor Dean to serve on the Nashville Domestic Violence Safety Assessment Task Force. His community involvement has included serving as Past President of The Exchange Club of Nashville and The Exchange Club Charities, Inc. He is also a Past President of The Antiques and Garden Show of Nashville. Mark and his wife, Nancy, have four children and are members of Westminster Presbyterian Church.