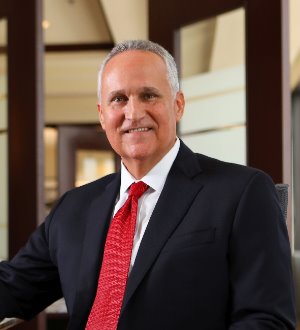 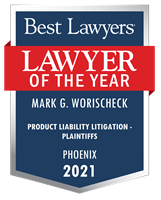 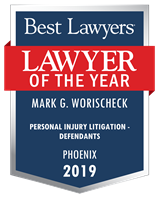 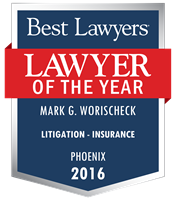 Since 2009, Mark Worischeck has served as the firm's President and Managing Shareholder. Mr. Worischeck has earned Martindale-Hubbell's highest AV® Preeminent™ rating. He has been recognized as one of Arizona's Finest Lawyers and selected to be included in Best Lawyers in America for 2013-2022 for his work in aviation law, commercial and construction litigation, insurance law, insurance litigation, personal injury and product liability litigation. He was also named by Best Lawyers as: 2021 Phoenix - Product Liability Litigation - Plaintiffs "Lawyer of the Year"; 2019 Phoenix - Personal Injury Litigation - Defendants "Lawyer of the Year"; and 2016 Phoenix - Insurance "Lawyer of the Year." He is recognized in the 2010-2021 editions of Southwest SuperLawyers and designated by SuperLawyers as one of Arizona's Top 50 Lawyers for 2011-2021. Mr. Worischeck has also been chosen by AZBusiness Magazine as one of Arizona's Top 100 Lawyers from 2009-2021; identified as a 2015 Leader in Construction Litigation; and is a recipient of the Lexology Client Choice Award (Arizona: Insurance 2016).

Mr. Worischeck has earned the respect of his peers as a neutral, regularly serving as a mediator, arbitrator and settlement conference judge. He is known for utilizing innovative methods to settle even the most complex case.

In addition to practicing law, Mr. Worischeck has served as a Judge Pro Tempore for the Maricopa County Superior Court since 2010. He also taught Insurance Law as an Adjunct Professor of Law at the Sandra Day O'Connor College of Law at Arizona State University from 2010-2012.

Represented the City of Phoenix in a lawsuit claiming the City defamed Plaintiff by placing him on the Brady List and that his reputation suffered. The City moved to dismiss his complaint based on his failure to specify a sum certain settlement demand in his Notice of Claim.

Represented 5 Native American plaintiffs in a case against an interstate trucking company and its contracted driver involving a tractor trailer/pick-up truck collision which resulted in five injured family members, two of which were minors who sustained severe, lifelong injuries. The matter settled before trial for high seven figures. (2012)

Successfully represented defendant insurance carrier in a case of first impression involving the repricing and payment of over $6 million of medical bills.

Represented defendant contractor in a suit brought by CNA Insurance Company seeking to deny coverage for construction defect claims with costs of repair asserted to be in excess of $20 million. Asserted bad faith claims over and against the carrier. Matter settled favorably in favor of defendant contractor. (2007)