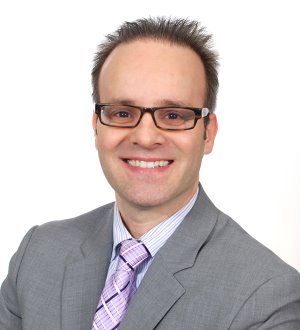 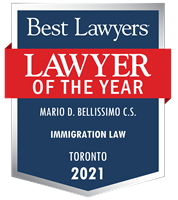 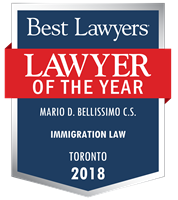 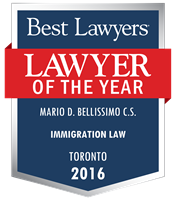 Mario D. Bellissimo is a graduate of Osgoode Hall Law School and a founding associate of Bellissimo Law Group. Mr. Bellissimo is a Certified Specialist in Citizenship and Immigration Law and Refugee Protection. His practice is focused primarily on litigation with an emphasis on immigration inadmissibility. Mr. Bellissimo has appeared before all levels of immigration tribunals and courts including the Supreme Court of Canada. Mr. Bellissimo acts on a pro bono basis as National Immigration Law and Policy Advisor for COSTI Immigration Resettlement Services and serves on multiple stakeholder committees as Vice-Chair of the Canadian Bar Association National Immigration Section. His service includes committees involving Citizenship and Immigration Canada, the Canada Border Services Agency, Service Canada, the Federal Courts, the Department of Justice, the Immigration and Refugee Board and Continuing Legal Education.

He represents clients from all over the world and Bellissimo Law Group is exclusively committed to Canadian citizenship, immigration and refugee matters. The firm handles thousands of files each year and represent clients at every stage of the process.