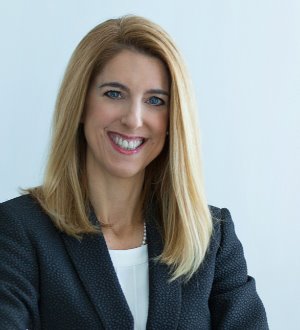 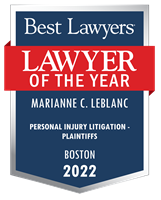 Marianne LeBlanc is a trial attorney with a proven record of success in the courtroom and over two decades of experience in representing injured clients. With record-setting verdicts in Massachusetts, Marianne’s advocacy skills draw on her commitment to making a difference both for her clients and the community at large. Marianne concentrates in all aspects of serious personal injury litigation, including liquor liability, premises liability, medical malpractice, and nursing home litigation. She has been named in “Best Lawyers in America” and has repeatedly been selected by her peers as one of the Top 100 Massachusetts Super Lawyers and one of the Top 50 Women New England Super Lawyers.

Marianne joined SUGARMAN after receiving her law degree from Boston College Law School in 1993 and has been a principal of the firm since 1999. In addition to her leadership roles in the legal community, Marianne also serves on the Town of Westwood's Commission on Disability and served for several years as the Chairman of Westwood's Finance and Warrant Commission.

Settlement of medical malpractice case for parents of newborn who died several hours after her birth due to the mismanagement of her labor and delivery, resulting in severe anoxic injury.

Wrongful death as a result of a car's detached tire

Settlement obtained for the family of a 26 year-old man who was killed when a tire detached from a truck on the highway, striking the man’s windshield and causing fatal head injuries. The defendant truck driver was a student a trade school where the tire and wheel assembly had been improperly secured to the truck by the defendant truck driver and a fellow student due to the negligence and gross negligence of the school in failing to provide proper supervision and inspection of the work performed.

Settlement for family of a 47-year-old man who was improperly discharged from the hospital following failure to diagnose and treat evolving myocardial infarction. Second largest medical malpractice settlement reported in Massachusetts in 2017.

Settlement of wrongful death case on behalf of a family who lost a child as a result of carbon monoxide poisoning. SUGARMAN attorneys brought product liability and general negligence claims alleging improper installation of a residential boiler, and a defect in the boiler which allowed it to create and introduce high concentrations of carbon monoxide into the home during foreseeable weather events, such as heavy snow storms.

Assault to a woman in bar

Jury verdict for personal injuries sustained when a woman was punched in the face by a professional hockey player in a Boston nightclub. The woman sustained bruising and psychological trauma.

Medical malpractice settlement against radiologist for failure to properly read a mammogram and diagnose breast cancer in a mother of four young children.

Medical malpractice settlement in lawsuit brought for bilateral hearing loss in newborn where lab test showed concerning/abnormal results, but the lab and physicians failed to act.

Gynecological malpractice verdict against OB/GYN for negligence in improperly positioning patient during surgery resulting in neuropathy, and injury to her ureter. The verdict is the largest ever recorded in the District Courts of Massachusetts.