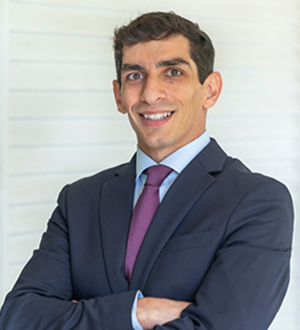 Navigate to map location for Marc A. Moccia Visit the website for Marc A. Moccia at https://kazcolaw.com/attorneys/marc-a-moccia-esq/
Your comment has been submitted!
We have encountered an error and are unable to process your comment at this time. Please refresh the page and try again later.
Add Comment
In making your comments, please do not refer to a pending legal matter.
Share My Profile
Post on Social

Attorney Marc A. Moccia focuses his practice in the areas of personal injury litigation, civil rights litigation, and divorce and family law. He has also litigated police misconduct cases with Partner Marsha V. Kazarosian and tried cases as lead counsel in the Family and Probate Court and Superior Court.

In January 2020, Attorney Moccia was appointed to the new Massachusetts Supreme Judicial Court’s Standing Committee on Lawyer Well-Being. Attorney Moccia also sits on the Massachusetts Bar Association's (MBA) Family Law Section Council and the MBA's Membership Committee. In 2017, he was an inaugural Fellow of the MBA’s Leadership Academy. The immediate past president of the Haverhill Bar Association, he is recognized in the 2020 edition of The Best Lawyers in America© in the area of Plaintiffs Personal Injury. Attorney Moccia served on the MBA’s prestigious Task Force, On the Law, Economy, and Underemployment, where he contributed to the Task Force's 2012 Report entitled "Beginning the Conversation." The report, which explored the causes of and solutions for underemployment of law student graduates, has received national recognition since its release in May 2012 and was featured in the American Bar Association Journal.

For many years, Attorney Moccia coached the Consentino and Sacred Hearts Middle School Mock Trial Teams that presented argument each year at the Haverhill Bar Association's Law Day ceremonies. He has also moderated several Massachusetts Bar Association and Massachusetts Continuing Legal Education panels and spoke at the MBA’s Practicing with Professionalism course in 2018. Attorney Moccia is an associate at Kazarosian Costello LLP, with offices in Haverhill and Salem, Mass. Read more about Kazarosian Costello LLP on the firm’s website: kazcolaw.com.