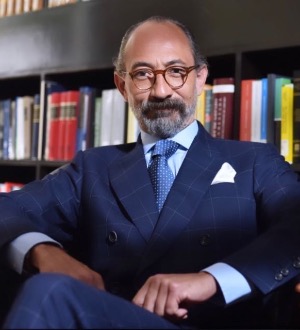 Navigate to map location for Luis Manuel Rodríguez Rivero Visit the website for Luis Manuel Rodríguez Rivero at http://www.rrabogados.com.mx
Your comment has been submitted!
We have encountered an error and are unable to process your comment at this time. Please refresh the page and try again later.
Add Comment
In making your comments, please do not refer to a pending legal matter.
Share My Profile
Post on Social

LUIS MANUEL RODRÍGUEZ RIVERO. Born in Mexico City in 1970. Education: Universidad Iberoamericana (1990). Degree-awarding ceremony 1996. Degree-award thesis subject “The Supervening Evidence in the Indirect Amparo Trial” (with honours and the best of the year thesis). Postgraduate Studies in Tax Law, Competition/Antitrust Law and Corporate Law provided by the Universidad Panamericana and the Instituto Tecnológico Autónomo de México. Memberships: Coordinator of the Constitutional Law Commission, Under-coordinator of the Administrative Law Commission and Board Member of the Mexican Bar Association, as well as Board Member of the Asociación de Servicios Legales, A.C. (pro-bono) of the Mexican Bar Association.

He has published several articles on Constitutional Law, Amparo Trial and Competition/Antitrust Law. He is co-author of the book “Economic Competition. Legal, Economic and Political Studies”, edited by the Instituto Tecnológico Autónomo de México. He has been a speaker at national and international forums, on Constitutional Law, Amparo Trial, Administrative Law and Competition/Antitrust Law in Mexico. He has been professor at the Instituto Teconlógico Autónomo de México (ITAM) and Universidad Panamericana at Postgraduate programs.

He has been included as a specialist in Amparo Trial, Administrative Law and Competition/Atitrust Law in many international publications such as Best Lawyers, Chambers and Partners, Who's Who Lawyers and Practical Law Company.

3 The Best Lawyers in Mexico™ awards