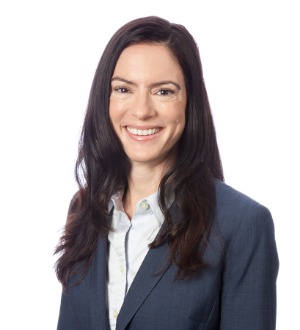 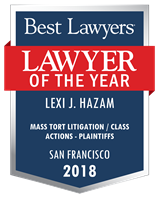 A Lawyer with Global Experience

In November 2022, Judge Yvonne Gonzalez Rogers of the Northern District of California appointed Lexi Co-Lead Counsel of MDL 3047, In re Social Media Adolescent Addiction/Personal Injury Products Liability Litigation, nationwide litigation against major social media platforms including Facebook (owned by Meta), Instagram, TikTok, Snapchat, and YouTube (owned by Google) alleging that the platforms cause addiction and mental health problems in adolescents, including suicidality and eating disorders, due to the defective and profit-driven design of their algorithmic recommendations and inadequate parental controls and age verification.

Lexi is also Court-appointed Interim Co-Lead Class Counsel for the Plaintiffs in litigation arising from the October 2, 2021 oil pipeline rupture off the coast of Orange County, which resulted in contamination of beaches, harbors, and fisheries with toxic oil. Plaintiffs’ complaint alleges that that two container ships damaged the pipeline by negligently dragging their anchors over it, and that the pipeline owner, Amplify Energy, failed to respond adequately to the spill. A proposed $50 million class settlement with Amplify has been reached and preliminarily approved by the Court.

Lexi is also Court-appointed Co-Lead Counsel for the thousands of Individual Plaintiffs in the Thomas Fire (No. 4965) and Woolsey Fire JCCPs (No. 5000), litigations against Southern California Edison arising from the colossal wildfires and ensuing mudslide Edison’s faulty equipment caused in recent years. In the Thomas Fire JCCP, Plaintiffs surmounted a demurrer to their inverse condemnation claim. After extensive discovery and shortly before a multi-plaintiff bellwether trial, the litigation entered into a settlement protocol. Shortly thereafter, the Woolsey Fire litigation entered into the same protocol. Together the individual plaintiffs in the Thomas Fire and Woolsey Fire cases have recovered over $1 billion thus far.

Lexi also specializes in developing regulatory and epidemiological evidence and scientific experts in pharmaceutical and device cases. She was appointed by the court overseeing the nationwide Abilify gambling injuries MDL litigation to the Plaintiffs Executive Committee and the Science and Expert Sub-Committee for the case, and was also appointed by the court overseeing the nationwide Benicar MDL litigation to the Plaintiffs’ Steering Committee and as Co-Chair of the Benicar MDL Plaintiffs’ Science and Experts Committee. Lexi also co-led a team handling the key FDA expert for the nationwide Opioids MDL litigation. Lexi additionally represented hundreds of hip replacement patients in the DePuy ASR and DePuy Pinnacle hip implant injury lawsuits.

Lexi also has international litigation experience. She previously represented hemophiliacs worldwide who contracted HIV and/or Hepatitis C from contaminated blood factor products in America. A confidential settlement was reached in 2009. Lexi played a key role in litigating the case and in negotiating and administering a settlement of the claims of over a thousand clients in 15 countries, utilizing her multilingual skills in work on several continents. The blood factor litigation constitutes one of the only cases in which major U.S. pharmaceutical companies entered a settlement with plaintiffs worldwide. Lexi also has significant experience representing the families of victims in major international aviation disasters.

The National Law Journal named Lexi a “Plaintiffs’ Lawyer Trailblazer” for 2022. In 2021, Lexi was named to the The National Law Journal’s 2021 list of Elite Trial Lawyers – Elite Women of the Plaintiffs’ Bar. In 2020 and 2021, Lexi was also named one of the “Top Women Lawyers in California” by the Daily Journal. Lexi is a past Chair of both the American Association for Justice’s Section on Qui Tam Litigation and its Section on Toxic, Environmental, and Pharmaceutical Torts (STEP). Lexi has published regarding the use of technology-assisted review in litigation. Lexi has spoken at many conferences on mass disaster, pharmaceutical, device, and qui tam litigation.