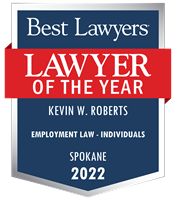 Kevin frequently speaks at eminent domain, construction, and employment law seminars. Originally from Melstone, Montana (and a Montana native) Kevin received his B.A. from Pacific University in Forest Grove, Oregon and his J.D. from the University Of Idaho College Of Law. Kevin was named a “Rising Star Super Lawyer” by Washington Law and Politics Magazine in 2005, 2007, 2008 and 2009. In addition, he was included in The Best Lawyers in America for Labor and Employment Law (2007, 2008).

"One could not ask for a better person to represent their interests! Kevin Roberts is honest, caring, and real!"

"In any dealing of this nature it is imperative that you as a client know you are in good hands. Kevin's unwavering support through our trial and appeal process supported this very fact, His professionalism in all regards allowed us to trust this fight to him. In doing so, we were able to focus on the day to day operations of our business and succeed coming out of the trial."