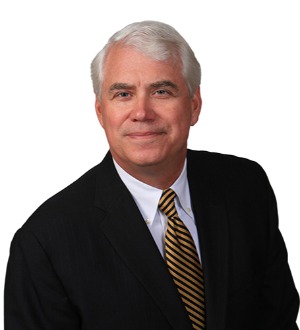 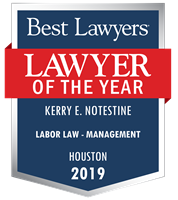 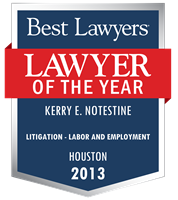 Kerry E. Notestine represents employers in all aspects of employment matters, including litigation under federal, state, and local anti-discrimination statutes, as well as the common law; administrative proceedings before various federal and state government agencies; and counseling employers regarding employment issues, particularly leaves and reductions-in-force. Kerry’s book, Employment Law Trials: A Practical Guide, published in 2005 by LexisNexis Publishing, is a leading work on the trials of employment cases.

Kerry has tried 19 lawsuits to verdict in federal and state courts, including one class action, and has represented companies in more than 20 administrative trials, non-labor arbitrations, and labor arbitrations. His federal jury trials include:

He also has litigated employment claims, in which the claimant alleged:

He has represented companies in more than 20 appeals.

Kerry has obtained numerous published decisions, including dismissals, summary judgments, and motions for decertification of collective actions. He has served as lead counsel in the defense of significant employment class/representative actions, including:

A frequent writer and speaker on employment matters before business and professional groups, Kerry has authored more than 10 articles and book chapters on employment law topics.

Kerry is the co-chair of Littler Mendelson's Profitability and Pricing Committee, a member of the EPLI Committee core group and a founding member of the Complex Litigation and Jury Trials Practice Group. Prior to becoming a shareholder at Littler, Kerry was an associate and partner with another firm for 14 years.

233 The Best Lawyers in America® awards

153 Best Lawyers: Ones to Watch in America awards

"Kerry Notestine continually provides this organization with outstanding service. He is accessible; he provides practical legal advice when addressing the various issues presented to him, and he always provides that advice in a most timely manner. He has become this organization's "go-to" guy concerning legal issues."