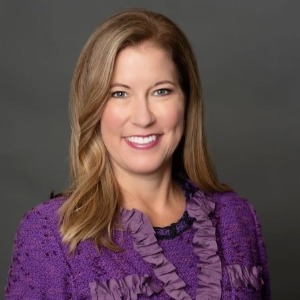 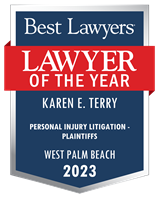 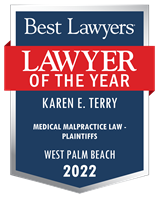 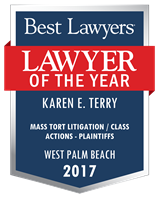 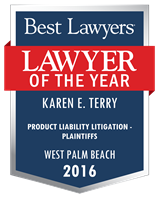 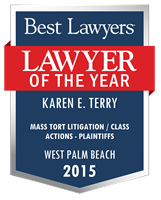 KAREN E. TERRY is a Shareholder at Searcy Denney Scarola Barnhart & Shipley, P.A. in West Palm Beach and has been with the firm for 25 years. Recently, Ms. Terry became Florida Bar Board Certified in civil trial law as well as in health care and medical malpractice, which are the highest honors one can achieve. For the last 10 years in a row, she has been named as one of The Best Lawyers in America. Recently honored as one of the top-rated lawyers in health care in the United States, Ms. Terry also was selected as one of the Top 100 Lawyers in the country and Top 10 Best Female Attorneys in Florida.

Courtroom View Network cited Ms. Terry for Top Plaintiffs’ Verdicts in 2015 and the Daily Business Review recognized her for Top Plaintiffs’ Verdicts in 2019. She received the highest honor awarded by the Daily Business Review as its 2016 Product Liability Litigation Lawyer of the Year. Ms. Terry was selected as The Lawyer of the Year, 2017, in Mass Torts Litigation/Class Actions by Best Lawyers in America. In 2018, she became a Supreme Court Certified Circuit Mediator in Florida.

Ms. Terry has been selected as one of the top five litigators by Florida Trend magazine and the South Florida Legal Guide. For the past 21 years she has been a member of the Florida Justice Association and the Palm Beach County Justice Association and has been active in her community. She recently was selected into the prestigious organizations the International Society of Barristers and the American College of Trial Lawyers. Ms. Terry is currently vice president of the Palm Beach Chapter of the American Board of Trial Advocates, with aspirations to become president.