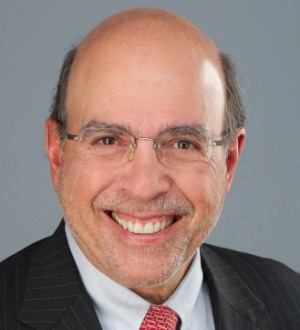 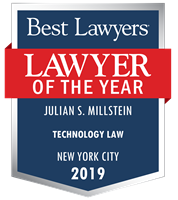 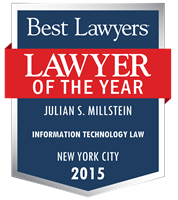 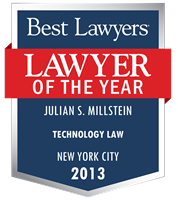 Julian S. Millstein, an attorney with over 45 years combined experience in business, technology and law, began his career as a computer programmer, systems analyst and IT consultant. His extensive legal career includes both litigation and transactional practice. As a litigator, he has represented international accounting and consulting firms, software and IT developers, and large- and small-scale users of IT and e-commerce services. Always on the forefront of developments, he represented a party in the first “domain name” arbitration in 1994. As a transactional attorney, Julian has led legal and business teams in structuring and negotiating individual outsourcing, systems integration and e-commerce contracts valued to $5 billion. He has also led strategic teams in successful workouts and restructuring of troubled outsourcing and similar initiatives.

Selected by his peers for his work in the practice areas of Information Technology and Technology Law, Julian was recognized in the 22nd edition of The Best Lawyers in America. This marks at least 10 consecutive years that he's been included in the publication. Julian has been honored with a listing in Chambers Global since 2000 and Chambers USA since 2004. In both publications he has achieved Senior Statesman status. Julian is referred to as "one of the original pioneers of the outsourcing sector." He is recognized as a senior practitioner in transactional and litigious work, "with deep experience in both areas on behalf of international clientele." Market commentators describe Julian as "amazing in the outsourcing space." In addition to his rankings in Chambers Global and Chambers USA, Julian has for several years been listed in New York Super Lawyers®, Who's Who Legal and Legal 500, and in Best Lawyers in America, which named Julian as its only 2015 Lawyer of the Year in the Tri-State Area in Information Technology Law. He has been recognized as a 2019 Lawyer of the Year for his expertise in the practice area of Information Technology Law in New York City. For almost 30 years, he has been rated AV Preeminent™ by Martindale-Hubbell.

Julian has written over 50 published articles, including “Practical Uses of ADR in Outsourcing Relationships”, published in the Spring 2011 issue of the New York Dispute Resolution Lawyer. He is co-author of Doing Business on the Internet – Forms and Analysis, the first Internet law forms book, published by Law Journal Press in 1997 and updated semi-annually. He has served as an expert witness on matters involving technology, software and e-commerce contracts. For nearly 20 years he was the Editor or Co-Editor in Chief of the Computer Law Strategist, Mutimedia Law Strategist and E-Commerce Law & Strategy, and for 15 years he taught Computer Law and Internet Law as Adjunct Professor of Law at Fordham University School of Law.

Julian was a founding partner of Brown Raysman & Millstein, the first computer law boutique in New York. Over a period of 25 years, under the founding partners’ leadership, the firm grew from a small boutique to one of the AmLaw 200 with over 250 attorneys. For over 10 years, he has been providing mediation and arbitration services through his law firm affiliations. Beginning June 2011, Julian’s ADR services have been offered through his independent mediation and arbitration practice, Julian S. Millstein ADR Services (www.MillsteinADR.com). He also maintains a legal practice independent of Moses & Singer.