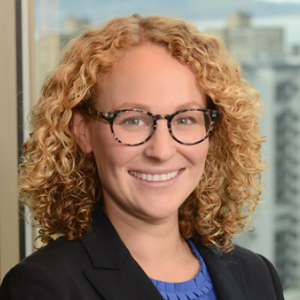 Navigate to map location for Julia Roos Visit the website for Julia Roos at https://litigationchambers.com/lawyers/julia-roos
Your comment has been submitted!
We have encountered an error and are unable to process your comment at this time. Please refresh the page and try again later.
Add Comment
In making your comments, please do not refer to a pending legal matter.
Share My Profile
Post on Social

Julia Roos maintains a general civil litigation practice with a focus on commercial and administrative law. She has appeared before all levels of court in British Columbia.

Julia received her JD in 2015 from Thompson Rivers University in Kamloops, BC. During law school, she participated in competitive moots and was managing editor of the Canadian Journal of Comparative and Contemporary Law.

Julia summered and articled at the firm before clerking for the Honourable Justice Robert Barnes at the Federal Court of Canada. She returned to the firm as an associate in 2017.

1 Best Lawyers: Ones to Watch in Canada™ award

Recognized in Best Lawyers: Ones to Watch in Canada™ 2023 for work in: