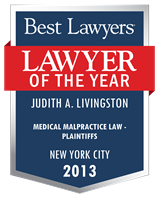 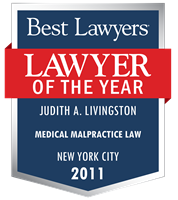 Judith Livingston – who has been called “A Legal Legend” by Law Dragon - is a senior partner at Kramer, Dillof, Livingston & Moore (KDLM). She specializes in medical malpractice and personal injury cases. Judith has won 35 trials with verdicts in excess of $1 million and negotiated hundreds of settlements that have resulted in payments of almost half-billion dollars.

Judith was named as one of “The 50 most influential women lawyers in America” by New York magazine. She is currently the president of The Inner Circle of Advocates; she was the first female, and youngest member, to be invited to be part of this prestigious organization, an invitation-only group limited to 100 of the best plaintiff lawyers in America. She has also been recognized by Best Lawyers for NY Medical Malpractice “Lawyer of the Year”, the National Law Journal as one of the “40 lawyers who have made their mark in the area of health care law”, Super Lawyers magazine, New York magazine, and Law Dragon. In 2014, Judith received the Presidential Medal from Hofstra University in recognition of “outstanding career achievement and professional leadership” and the Fordham Founder’s Award for “individuals whose personal and professional lives reflect the highest aspirations of the University’s defining traditions, as an institution dedicated to wisdom and learning in the service of others”.