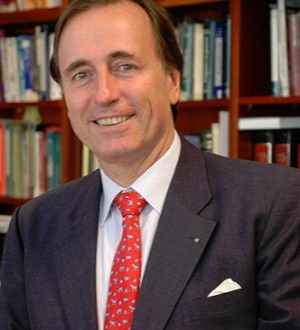 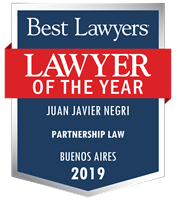 Juan Javier Negri is a founding member of the firm (1990). He specializes in corporate governance, mergers and acquisitions, and general corporate law. As an avid art collector, he now devotes part of his time to art law.

He has acted as Adjunct Professor of Commercial Law (1977-1992) and Professor of Law at the Graduate Course on Banking Law of the Argentine Catholic University (1987). He also was Associate Professor of Banking Institutions at the Graduate School of Economy and Business Administration, (1986-1993); Guest Lecturer on Foreign Trade and Exchange Control Laws at the Graduate Course on Legal Aspects of Financial Activities, Escuela de Abogacía de Buenos Aires (1990); Professor, Commercial Law Continuing Education, (Legal Aspects of Capital Markets Law) School of Law, University of Buenos Aires (1992). Professor, Corporate Conflicts, Austral University, since 1993. He also currently teaches Mergers and Acquisitions, at the Universidad di Tella Law School (Buenos Aires) and Universidad Siglo XXI (Córdoba) 2000. He was Lecturer on Latin American Law at the University of Illinois, (1979). He also taught Legal Aspects of International Financing at the Center of Comparative Studies, Buenos Aires, (1981); at the Bank of Boston Foundation’s School of Export Trade (1987-1990); at the Mar del Plata Stock Exchange (1988); at the Córdoba Seminar on Risk Investments (1988); Santa Cruz (Bolivia) Bar Association, 1989; Center for Macroeconomic Studies (CEMA), Buenos Aires. He is a Member of the Board of Advisors, Universidad Torcuato di Tella Law School. He was a Speaker on “Corporate Governance” as representative of the Instituto Argentino para el Gobierno de las Organizaciones, to discuss the White Paper on Corporate Governance, organized by the OECD in Cartagena, Colombia, May 2004.

Javier was a contributor to “Product Liability: a Manual on Practice-Argentina,” Oceana Publications, New York, 1981; “Business Operations in Argentina,” Washington, D.C., 1988, and has authored “Restructuring of Public Banks: A Proposal for Change” (1990) which won him the Argentine Banks’ Association 1990 Award. He also received the “Argentine Legal Profession Award” granted by the Argentine Press Association and Argentine Federation of Bar Associations (1990). He is also author of various law review articles on corporate mergers, joint ventures, voting arrangements, exchange controls and other corporate matters, and was a former columnist of the Buenos Aires daily “La Prensa”. He has contributed with several editorial notes to “La Nación”, a leading Argentine newspaper.

Javier is also a member of the International Bar Association (of which he was Deputy Secretary General for America-South, 1992-1998 and is member of several standing committees); the American Society of International Law; the Argentine Association of Comparative Law; the Institute of Legislative Studies (Member of the Board, Commercial Law Section, 1987-1988); the Associazione Giuristi di Lingua Italiana, Milano; the Argentine-Swiss Chamber of Commerce (Board Member, 1998-2000); PENT Foundation -Fundación para la integración de la Argentina en el mundo- (Member, Board of Directors, 2002-). He is also Chairman of the Board of Trustees of Fundación Sur since 2003; Treasurer Pro-tem of the Board of Trustees of Fundación Konex, since 2004, and Chairman of the Board of Trustees of PlaNet Finance until 2013.

1 The Best Lawyers in Argentina™ awards

Recognized in The Best Lawyers in Argentina™ 2020 for work in: