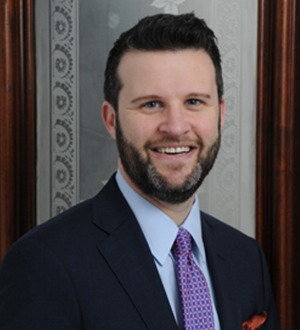 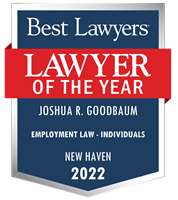 A graduate of Harvard and Yale, Joshua R. Goodbaum represents individuals in litigation and negotiation, with particular emphases in employment, civil rights, and appeals. He has represented clients in every level of our justice system, from local trial courts to the Supreme Court of the United States, in matters ranging from constitutional law to contract disputes.

Josh’s experience in Connecticut employment law runs the gamut, from discrimination (on the basis of race, sex, age, disability, sexual orientation, religion, marital status, pregnancy, or national origin) and sexual harassment, to wrongful termination, retaliation, non-competition agreements, contract disputes, and wage and hour issues, including claims for unpaid overtime and commissions. He has successfully counseled employees and executives in the negotiation of separation agreements of all sizes – from less than $25,000 to more than $25 million.

Beyond his focus on employment law, Josh regularly assists his fellow lawyers with appeals and other complex legal projects, regardless of the subject matter. He honed his writing skills while serving as a law clerk for Associate Justice Neil M. Gorsuch of the Supreme Court of the United States when Justice Gorsuch was a Judge on the U.S. Court of Appeals for the Tenth Circuit. Josh’s writing has appeared in a variety of legal publications, including the Harvard Law Review.

Josh’s preeminent status in the Connecticut legal community is widely recognized. He ranks among The Best Lawyers in America, the oldest and most respected peer-review publication in the legal profession. The Connecticut Law Tribune named him one of its 2015 “New Leaders of the Law,” and he has been designated as a “Rising Star” by Connecticut SuperLawyers since 2015. Martindale-Hubbell rates him as AV Preeminent, which indicates that his peers and judges rank him at the highest level of professional excellence.

Prior to joining Garrison, Levin-Epstein in 2011, Josh worked at a large corporate firm in Washington, DC, and interned at Gay & Lesbian Advocates & Defenders (GLAD) in Boston, the San Francisco District Attorney’s Office, and the U.S. Department of Justice.

Josh is a native of the New Haven area. In his spare time, he enjoys choral singing, playing tennis, and doting on his dog, Mungo.