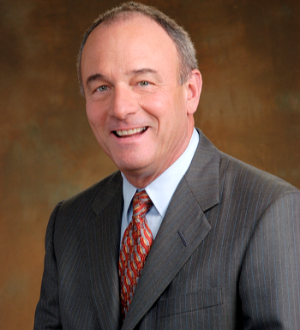 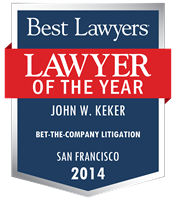 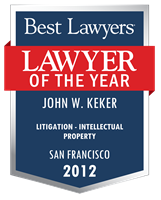 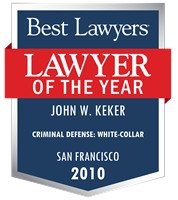 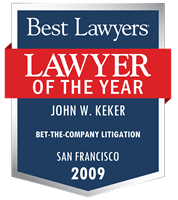 Mr. John W. Keker co-founded Keker and Van Nest LLP in 1978 and is its Partner. Mr. Keker typically tries two or three cases each year, which range from patents to contracts, criminal defense to securities fraud, copyright and trademark to business torts. He serves as Vice Chair of Presidio Trust and has been its Director since April 2015.

He serves as a Member of Supervisory Board at Super lawyers. He then served as an Infantry Platoon Leader in Vietnam while a Lieutenant in the United States Marine Corps, until he was wounded and retired from the Marine Corps in 1967. He served as Law Clerk to Retired Chief Justice Earl Warren, United States Supreme Court, as Staff Attorney at the Natural Resources Defense Council, Washington, D.C.; and as an Assistant Federal Public Defender, Northern District of California. He went into private practice in 1973. In 2006, the National Law Journal recognized him as one of the 100 most influential lawyers in the United States. In 2003, the San Francisco Chronicle named him the best lawyer in the Bay Area. That same year, American Lawyer called him "a giant of the IP trial bar."

In 2001, California Lawyer identified him as most named by other lawyers as the person they would hire if trouble strikes. Each year since 1998, he was named one of California's most influential attorneys by the Los Angeles Daily Journal. He has been listed in every edition of Chambers USA and Best Lawyers In America in two categories, Criminal Defense and Business Litigation and in Super Lawyers Magazine in intellectual property litigation. He was inducted into the California State Bar's Litigation Hall of Fame in 2002 and received the Significant Contribution to Criminal Justice Award in 1996 from the California Attorneys for Criminal Justice. He is a fellow of the American College of Trial Lawyers, the International Academy of Trial Lawyers, the American Board of Trial Advocates and the American Bar Foundation. Some of the cases he was include are: Cases include in 2005 representing Google against Microsoft in a high profile trade secret case; serving as trial counsel in U.S. v. Frank Quattrone in 2003 (hung jury) and in 2004 (conviction reversed by 2nd Circuit, 2006, reassigned to different trial judge then dismissed); in 2002 winning a jury trial for Genentech in a $300 million patent dispute with Chiron; in 2001, representing Cadence Design Systems, Inc., winning $195 million from Avant! in restitution for trade secret theft.