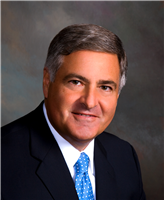 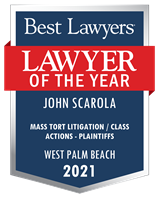 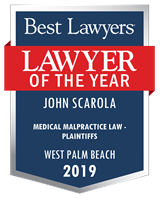 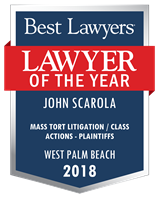 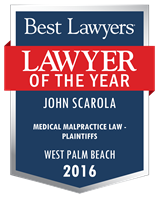 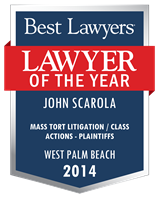 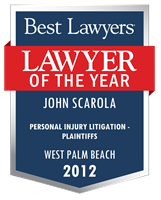 JOHN (JACK) SCAROLA graduated with honors from Georgetown University in 1969 and from Georgetown Law Center in 1973. Before joining the firm in 1978, he was Chief Felony Prosecutor in the Palm Beach County State Attorney’s office, where he was lead counsel in the trials of more than 50 major criminal cases, including the nation’s first gavel-to-gavel televised murder trial.

Mr. Scarola is Board Certified in both Civil Trial Practice and Commercial & Business Litigation. While he devotes a substantial portion of his practice to personal injury, wrongful death, and medical negligence cases, he has developed a special interest in representing individuals and small businesses damaged by abuses of corporate power.

A former president of the Palm Beach County Trial Lawyers Association, Mr. Scarola has played an active leadership role in both county and statewide professional associations. He is a recipient of The Florida Bar President’s Pro Bono Service Award and the Legal Aid Society’s Community Service Award honoring his involvement in giving free legal help to individuals and community groups.

Mr. Scarola is a director of the prestigious International Academy of Trial Lawyers, whose invitation-only membership is limited to 500 attorneys. He has been listed repeatedly in Best Lawyers in America in five separate practice areas, is a 2019 Best Lawyers Lawyer of the Year, and is the 2018 recipient of the Florida Justice Association Lifetime Achievement Award.