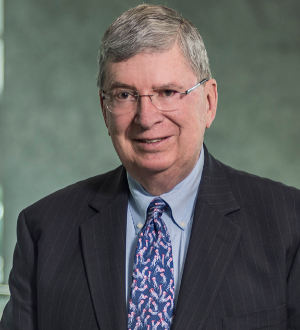 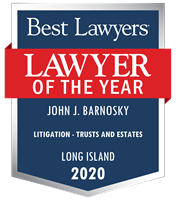 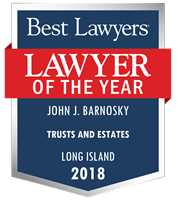 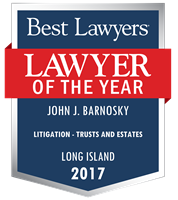 John J. Barnosky is a partner focusing in trusts and estates law. His practice includes estate litigation; estate planning, probate and administration of estates and trusts; and taxation. He provides estate planning and counseling advice to families, individuals, banks, foundations, and other institutions. Mr. Barnosky represents clients in litigated trust and estate matters, including will contests and disputes over the validity of trusts, before the Surrogate’s Courts and other courts throughout New York State. He is a contributor to Farrell Fritz’s New York Trusts & Estates Litigation blog.

Mr. Barnosky serves on the EPTL/SCPA Advisory Committee established by the New York State Legislature to review and modernize statutes relating to trusts and estates. He is also a member of the Taxation Section of the American Bar Association and a fellow of the American College of Trusts and Estates Counsel. For many years, Mr. Barnosky was the editor of the North Fork Bank Estate Review. He has also written articles published in the New York Law Journal, The Nassau Lawyer, and the Journal of the Suffolk Academy of Law. An Adjunct Professor of Law at Touro Law School from 1990-1993, Mr. Barnosky is a frequent lecturer at New York State Bar Association seminars on Trust and Estate Practice.

In 2016, the publication Chambers High Net Worth recognized Mr. Barnosky as a Leading Individual, NY Private Wealth: Disputes. He has been selected f or inclusion in The Best Lawyers in America annually since 1999 in the fields of Litigation-Trusts & Estates and Trusts & Estates. In 2017, he was named a "Lawyer of the Year" by the publication. He was included in The Best of the U.S.’s 2008 List of the Best Lawyers in the U.S. He was selected f or the 2007- 2016 New York Super Lawyers-Metro lists (Estate & Trust Litigation) and was named one of the Best Trusts & Estates Lawyers in America by American Lawyer in the November 2004 issue.