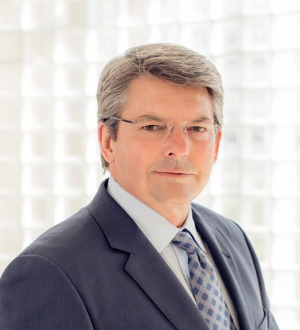 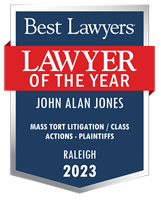 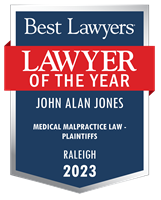 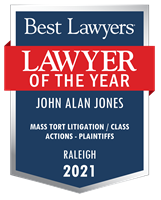 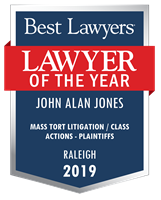 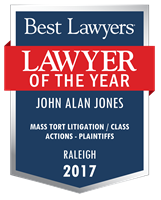 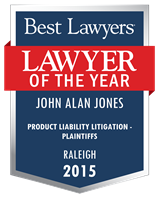 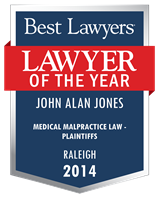 John Alan Jones is the founding member and managing partner of Martin & Jones, where he has worked since he began practicing law in 1982. John Alan was born and raised in Pine Level, North Carolina. He graduated from the University of North Carolina at Chapel Hill, where he was inducted into the Phi Beta Kappa honorary society. After graduating from UNC-Chapel Hill in 1979, he entered law school at UNC-Chapel Hill, where he was a member of the Holderness Moot Court.

Upon graduating from law school in 1982, John Alan began representing workers with occupational diseases caused by toxic chemicals and cotton dust. His practice soon became statewide. He represented hundreds of North Carolina workers in these occupational disease cases, which led to an interest in both medicine and product liability claims. In the mid-1980's, he began representing people who had been injured by major corporations manufacturing toxic chemicals, asbestos, defective pharmaceuticals and harmful medical devices.

He also devotes a significant amount of his work time to consumer class action litigation and representing small businesses victimized by unfair business practices of major corporations. John Alan served as lead counsel on behalf of thousands of consumers in class actions against major banks arising from predatory lending practices. After more than seven years of litigation, John Alan and partner Chris Olson settled predatory lending class actions against a Bank of America subsidiary, NationsCredit, for $38,750,000 and a CitiBank subsidiary, Citifinancial, for $42,500,000. Each of these class actions went to the North Carolina Court of Appeals and the North Carolina Supreme Court, resulting in landmark appellate decisions providing protection for North Carolina consumers and providing compensation to more than 12,000 North Carolina consumers.

John Alan does not limit his law practice to the state of North Carolina. He handles both trial and appellate work in state and federal courts throughout North Carolina and around the U.S. He has received Martindale-Hubbell's "AV" peer review rating, which is the highest rating given. Due to recognition by other attorneys from around North Carolina, John Alan has been recognized by the following organizations: