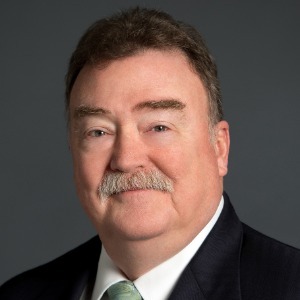 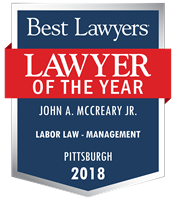 Area of Emphasis
John McCreary is a shareholder in the Employment and Labor Services and Public Sector Services groups of Babst Calland. Mr. McCreary’s practice is concentrated in labor and employment law, with emphasis on negotiation and enforcement of collective bargaining agreements, ERISA pension and benefit litigation, employment discrimination, relationships with a unionized workforce and defense of OSHA citations under the General Industry and Construction standards.

Mr. McCreary’s practice spans the full range of issues encountered in the employment setting, including labor contract negotiation and administration, grievance arbitration, benefit plan issues, disputes over discriminatory hiring practices, wrongful termination claims, as well as litigation over pension and benefit entitlement. He represents employers before both the National Labor Relations Board and the Pennsylvania Labor Relations Board in proceedings involving union organizing campaigns and defense of unfair labor practice charges, as well as representing employers in OSHA proceedings, and has considerable experience in the labor and ERISA issues presented by the purchase, sale and closing of businesses, including WARN Act compliance.
His practice also involves the defense of employers in matters before the Pennsylvania Human Relations Commission and the Equal Employment Opportunity Commission, including defense of claims for race, sex, age and disability discrimination and claims of sexual harassment, as well as representing clients in litigation matters in the state and federal courts of Pennsylvania, West Virginia and Ohio.

Mr. McCreary provides legal services to private employers in the construction industry in Pennsylvania and West Virginia. As a member of the AGC Labor and Employment Law Council, he addresses many of the day-to-day labor relations issues impacting operations in the construction industry, as well as advising clients on emerging controversies. Mr. McCreary also advises regional hospitals in Pennsylvania and Ohio on labor relations matters, labor contract administration, grievance and arbitration proceedings and employment litigation.In addition to his work for private employers, Mr. McCreary also has an extensive experience representing public employers, including roles as labor counsel to counties, boroughs, townships and authorities in matters involving labor negotiations, labor arbitration issues and various employment matters.

Background
Mr. McCreary obtained his undergraduate in 1980 from the University of Pennsylvania and his J.D. from Duquesne University’s School of Law in 1985, where he was Executive Recent Decisions Editor of the Duquesne Law Review.

Memberships and Affiliations
Mr. McCreary is admitted to practice before the state and federal courts in Pennsylvania, Ohio and West Virginia. He is also a member of the bar of the United States Courts of Appeals for the Third, Fourth and Seventh Circuits, and a member of the Associated General Contractors of America Labor and Employment Law Council. Mr. McCreary has been listed in The Best Lawyers in America® by BL Rankings in the Labor Law – Management Section since 2015 and was named the Best Lawyers® 2018 Labor Law – Management “Lawyer of the Year” in Pittsburgh, Pa.