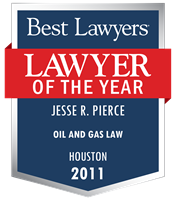 Jesse Pierce has more than 40 years of litigation experience and has tried many types of cases in state and federal courts of Texas and other states. He specializes in civil trials of cases dealing with complex energy and commercial issues. Mr. Pierce is Board Certified in Civil Trial Law by the Texas Board of Legal Specialization and is a Commercial Arbitrator for American Arbitration Association. Mr. Pierce has been inducted into the Litigation Counsel of America, a trial lawyer honorary society composed of less than one-half of one percent of American lawyers. Fellows are selected based on effectiveness and accomplishment in litigation, both at the trial and appellate levels, and on the basis of a superior ethical reputation. Fewer than 60 attorneys in Houston are Fellows of the LCA. He is licensed to practice in Texas, Oklahoma, Arkansas, Pennsylvania and Ohio.

Among the other appeals he handled during the early years of his practice were:

In the late 1970s, Mr. Pierce began to handle complex oil and gas, land and commercial cases. He handled a number of cases for major oil companies involving disputes with royalty owners and disputes between gas producers and pipeline companies for clients such as Chesapeake Energy, Texaco, Shell, Pennzoil-Quaker State, Mobil and Superior Oil Company. Cases he has tried and appealed are: