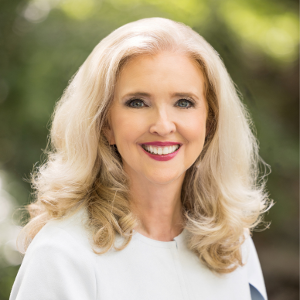 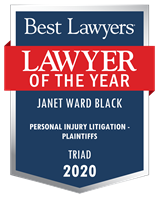 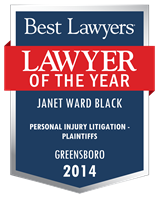 Janet Ward Black is the principal owner of the personal injury law firm, Ward Black Law located in Greensboro. The 36-person firm is one of the largest woman-owned law firms in our state. Ward Black Law has represented over a thousand clients in the past 4 years with client settlements of over 34 million dollars.* Ward Black Law represents people in personal injury, workers’ compensation and defective product actions.

The program she created while president of the 16,000 member Bar Association, “4 ALL,” has been used as a model in the United States and Canada for providing free legal services to the poor.

Black is a frequent lawyer educator and motivational speaker. She is a Trustee Emeritus of Hood Theological Seminary and has served on many non-profit boards and on many international mission trips. She received the North Carolina State Bar’s Distinguished Service Award in 2009 and the Charles Murphy Award for public service by Duke Law School in 2010. Black has been named in North Carolina Super Lawyers, North Carolina’s Legal Elite and The Best Lawyers in America. She also retains an AVVO rating of 10, which is the highest rating that can be achieved. Black is a member of the Women’s Presidents Association and C12 Christian CEOs and Business Owners’ Group.

"Janet Ward Black is very helpful and extremely knowledgeable and experienced. Her no-nonsense but compassionate attitude puts one at ease when talking to her. She gives you the confidence that you and your case are in good hands if she is working for and with you."