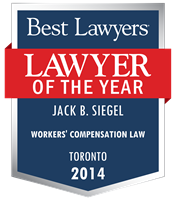 Jack Siegel, a member of the Blaney McMurtry Labour and Employment practice group, focuses largely on workers' compensation, wrongful dismissal, occupational health and safety and human rights matters. Jack is a former Chair of the Workers’ Compensation Section of the Ontario Bar Association, and has been listed in Best Lawyers in Canada for Workers' Compensation Law every year since 2006, and was named by that publication as 2014 Lawyer of the Year in the field of Workers’ Compensation in Toronto.

Jack has, further, been rated since 2004 by Lexpert Canadian Legal Directory as a Leading Practitioner (consistently recommended) in Workers' Compensation Law.

A distinct and substantial area of practice for Jack is the field of Election and Political Law. As one of the only lawyers in Canada whose practice entails a significant and ongoing component of work in this area, participants at all levels of the political process turn to Jack to assist them in navigating the increasingly complex electoral processes and financial regulatory schemes that have arisen in recent years. Jack’s knowledge of the players throughout government also enables him to provide assistance to clients in advocacy and problem solving with various government departments and agencies, both federal and provincial, and he is regularly called upon to represent individuals and businesses before Lobbying and Integrity Commissioners at all levels.

In his Labour and Employment practice, Jack represents employers, workers and trade unions. He has a wealth of experience before the Workplace Safety and Insurance Appeals Tribunal (where he served as Tribunal Counsel for three years in the 1980's), Appeal Resolution Officers of the Workplace Safety and Insurance Board (WSIB), the Ontario Labour Relations Board, grievance arbitrations, prosecutions under the Occupational Health and Safety Act, hearings under the Employment Standards Act, and before the Courts on wrongful dismissal actions, judicial review applications, and restrictive covenant injunction applications.

A considerable proportion of Jack's Labour and Employment practice is dedicated to workers' compensation matters. He represents employers in such areas as rate group and return-to-work rulings and employees on matters such as duration and amount of entitlement, return to work rights, and labour market re-entry. Working closely with members of Blaneys’ Insurance Litigation practice group, he acts as well on specialized applications in personal injury actions relating to the loss of the right to sue where an injured person may be entitled to Workers' Compensation benefits.

In the area of election law, Jack has for over 25 years acted on behalf of federal, provincial and municipal candidates for office on judicial recounts, making arguments as to whether and how particular votes should be counted.

Jack has also been involved in numerous court applications relating to election finance law, appearing before the Lortie Commission on Electoral Reform and Party Financing in 1990, and testifying several times over the years at committees of both the Parliament of Canada and the Ontario Legislative Assembly on matters of electoral law and reform.

Co-Chair of the Constitution and Legal Affairs Committee of the Liberal Party of Canada from 1998 to 2003, Jack was the party’s Senior National Legal Counsel (Election Law) for each federal election campaign from 2000 to 2015, served as Ontario Campaign Co-Chair for the 2008 federal election, and in 2015 as the National Chair of the Party’s Green Light Committee, clearing potential candidates to seek nomination as candidates of the Liberal Party of Canada.

Jack was General Counsel to the Ontario Liberal Party campaigns of Premier Dalton McGuinty from 2003 to 2011 and Premier Kathleen Wynne in 2014 and 2018. He served for many years as General Counsel to that Party, and represented it as a member of the Political Parties' Advisory Committee to the Chief Electoral Officer of Ontario. In 1996, 2013 and 2020, as the Chief Returning Officer for the Ontario Liberal Party, in charge of the voting process for the leadership conventions that elected Dalton McGuinty, Kathleen Wynne and Steven Del Duca, respectively. 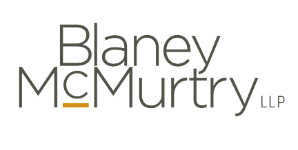 31 The Best Lawyers in Canada™ awards

4 Best Lawyers: Ones to Watch in Canada™ awards