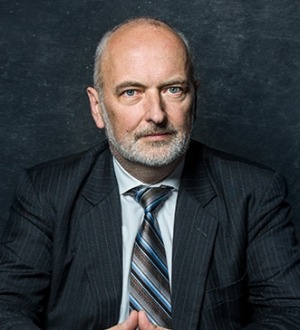 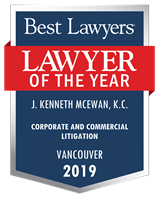 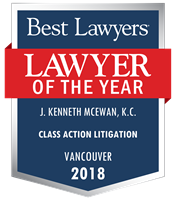 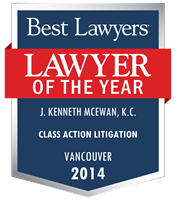 Ken McEwan practices as general counsel, with a particular focus on complex corporate-commercial litigation, class action litigation, commercial arbitration and administrative law at the trial and appellate levels, including the Supreme Court of Canada. He received the designation of Queen’s Counsel from the Attorney General of British Columbia in 2004.

Mr. McEwan was named British Columbia litigator of the year for each of 2013 - 2016 by Benchmark Canada. He has also been a finalist for both Canadian class action litigator of the year and Canadian competition litigator of the year during that period. In 2017 Benchmark recognized him as one of the Top 50 Trial Lawyers in Canada. He was also named one of the leading 100 Cross-border Litigators in Canada in the 2017 Lexpert Magazine in the categories of commercial litigation, class actions, and securities litigation. He was named in the 2017 Lexpert/American Lawyer Guide to the Leading 500 Lawyers in Canada. He is listed in the Legal Post Best Lawyers in Canada in the areas of securities law, corporate commercial and class action litigation, and has received the highest ranking available in dispute resolution by Chambers Canada for 2017. Martindale-Hubbell has given Mr. McEwan a ranking of AV - Preeminent.

Mr. McEwan is the Secretary/Treasurer of the International Society of Barristers, a Fellow of the American College of Trial Lawyers, and a Director of the Advocates’ Society. He has been appointed by the Law Society as the civil litigation representative to the Committee on Relations with the Judiciary. He was appointed by the Attorney General of British Columbia to the Supreme Court Rules Revision Committee where he served for many years until the committee disbanded in April 2016.

Mr. McEwan is author of the third edition of Sopinka on the Trial of an Action. He is an adjunct professor of law at the University of British Columbia Law School, teaching its trial advocacy course. He is a regular contributor to both the Continuing Legal Education Society of British Columbia and the Advocates’ Society on topics related to litigation and arbitration. He chairs a panel of the British Columbia Inns of Court project which was established to foster professionalism amongst young lawyers. Mr. McEwan is a past president of the Sopinka Cup Society which hosts the national finals of the Canadian law school trial moot competition in Ottawa.