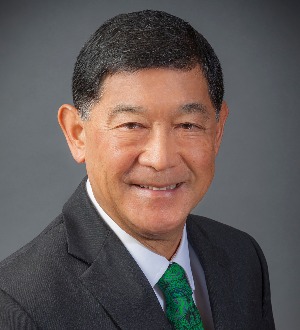 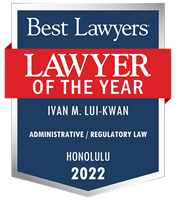 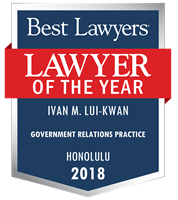 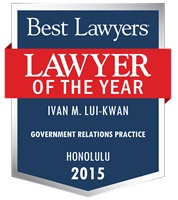 Ivan M. Lui-Kwan was born and raised in Hilo, Hawaii. He has practiced law for 50 years, focusing on Hawaii’s land use, administrative and real estate law.

Mr. Lui-Kwan has also been recognized as the 2014 Lifetime Achievement Award winner by Pacific Edge Magazine, and the 2015 Queen Emma Ball Honoree for his many contributions to the St. Andrew's Schools and the people of Hawaii. He is Ambassador to the United States for the Maori King Tuheitia and was knighted by King Tuheitia in November 2015. He is also recognized as a 2017 Distinguished Alumni Award honoree from Saint Martin's University, where he studied Political Science and graduated with honors. In July 2019 the St. Francis Healthcare System of Hawaii recognized him with the St. Francis Assisi Spirit Award.

He was presented with the Native Hawaiian Chamber of Commerce 'O'O Award.

From the beginning of his career, Mr. Lui-Kwan committed to improving the quality of life for all of Hawaii’s residents, particularly those who occupy the economic and societal underclass in Hawaii. His vision is a healthy community in which all Hawaii residents have access to good health, fulfilled employment, comfortable housing and a pleasing physical environment.

In the course of pursuing his vision, Mr. Lui-Kwan has built a vast network of key allies in the three levels of government, in the native Hawaiian community, in the Pacific Islands countries particularly in Polynesia and in Micronesia, in the senior management circle of major businesses, in the justice system, and in the world of nonprofit organizations. Real estate, renewable energy, hospitality, health care, and transportation companies seeking to enter Hawaii’s business environment, find his knowledge of Hawaii’s unique environment and inner workings invaluable.

The following is a partial list of activities, which Mr. Lui-Kwan has engaged in pursuit of his vision for Hawaii.

Past Chairman of the Board of Honolulu Authority for Rapid Transportation (“HART”). HART is the largest public works project in Hawaii’s history.

A Native Hawaiian, Mr. Lui-Kwan is managing member of Hokukahu, LLC. Hokukahu is the for profit subsidiary of Hokupili Foundation, the native Hawaiian nonprofit organization which serves approximately 60,000 residents of the Hawaiian Homelands communities in Hawaii. Hokupili’s mission is to create economic opportunity and capacity building for native Hawaiians.

State Chairman for the Committee on Energy and Environment for the Sovereign Councils of the Hawaiian Homelands Assembly.

Ambassador to the United States and Hawaii for the Maori King, Kiingi Tuheitia, and the Tribes of Aotearoa.

Former President of the board of the Historic Hawaii Foundation.

Director for American Judicature Society (National) and Vice-Chairman for the Hawaii Chapter. The mission of AJS, a 100-year-old organization, is the improvement of the justice system in the United States.

Former member of the Disciplinary Board of the Hawaii Supreme Court.

Former Chairman of the Board, March of Dimes, Hawaii Chapter.