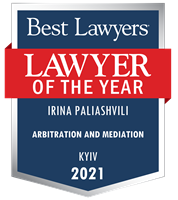 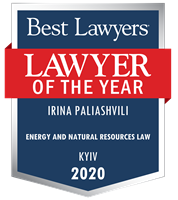 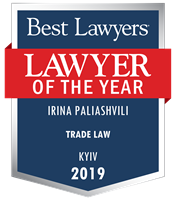 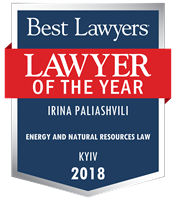 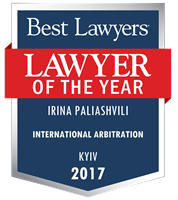 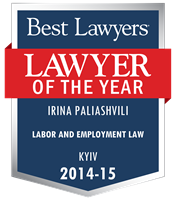 Irina Paliashvili began her private practice by co-founding one of the first private law firms in Ukraine, and expanded by founding the Washington-based RULG-Ukrainian Legal Group, P.A., where she serves as the President and Senior Counsel. She is also the Managing Partner of the Kiev-based Ukrainian Legal Group LLC.

Before going into private practice, she served as General Counsel (International) to two major companies in Ukraine. During that time, Irina completed a six-month assignment with a prominent Chicago law firm as a part of the ABA Internship Program followed by a four-month assignment working with a leading German law firm in Frankfurt. She has also served as a Professor of Law at the Kiev State University Law School.

She is regularly included in the Hundred Best Lawyers of Ukraine (Clients' Choice) and in the list of most successful and well-known (publicity index) women lawyers in Ukraine based on the surveys conducted by Yurydychna Gazeta, a leading legal publication in Ukraine. She is also regularly included in the top 10 best lawyers in Ukraine, as well as named "Lawyer of the Year" in several practice areas (Antitrust, Arbitration and Mediation, Corporate, Energy and Natural Resources Law and Mergers and Acquisitions) by Best Lawyers®, which is regarded as the definitive guide to legal excellence in the U.S. and around the world.

In addition to general corporate and transactional expertise, Irina has special experience in the areas of energy, oil and gas, intellectual property protection and antimonopoly law, as well as commercial dispute resolution and mediation (she is a mediator trained and certified by the CPR Institute for Dispute Resolution in New York and a member of its International Panel of Distinguished Neutrals). She has extensive experience in providing independent expert witness reports and testimony on the matters of Ukrainian and Russian law in international arbitration and in the US, UK and Swedish courts proceedings, including all formats of oral testimony: direct examination, cross examination, expert conferences, court depositions and court testimonies. Irina is included in the arbitrators panels of the Riga International Commercial Arbitration Court (RICAC), the International Arbitral Centre of the Austrian Federal Economic Chamber (VIAC) and Georgian International Arbitration Centre (GIAC).

Irina is fluent in English, Ukrainian, Russian, Georgian, and Spanish. She divides her working time between Washington, D.C. and Kiev

2 The Best Lawyers in Ukraine™ awards

Recognized in The Best Lawyers in Ukraine™ 2022 for work in: