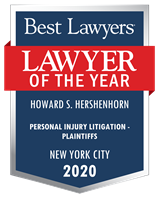 Howard S. Hershenhorn is the youngest lawyer to be selected by his peers for inclusion in the Super Lawyers 2012 Top 100 New York Lawyers, which was published in the Magazine Section of the New York Times. Referred to as "The Best of the Best", he is among the top 100 lawyers who received the highest point totals in the New York Metro nomination, research and blue ribbon review process. Additionally, in each year since 2007, he has been recognized by his peers for inclusion in The Best Lawyers in America and New York Magazine's Best Lawyers in New York in the specialties of Personal Injury Litigation and Medical Malpractice. He was also awarded the highest rating by his peers in the 2011 Martindale-Hubbell Peer Review Ratings.Howard has obtained some of the largest personal injury and medical malpractice verdicts and settlements in New York and New Jersey. His recent settlement of $26 million for the family of a well-known Financial Analyst who was struck and killed by a truck when she was crossing Sixth Avenue in Manhattan is believed to be the largest in the State of New York for the wrongful death of one person. His multimillion dollar April, 2010 jury verdict in a bus accident case in Nassau County was featured on the front cover of Newsday. His New York County jury verdict of $12.5 million in a wrongful death elevator personal injury case and cash settlements of $16 million for a Brooklyn construction worker, $8.625 for a Queens construction worker, $10.75 million for a Manhattan nurse injured when the tires of a tractor trailer broke loose and struck her, along with recent medical malpractice settlements of $8.5 million and $6 million are all a testament to his abilities as a trial lawyer.Howard Hershenhorn has represented victims of serious accidents and medical malpractice exclusively since 1996. Prior to joining the firm, he worked as a litigator in one of the largest law firms in the world, DLA Piper, where he represented contractors, building owners, automobile manufacturers, bicycle manufacturers, pharmaceutical corporations, insurance companies, hospitals and doctors. Because of this experience he possesses a unique insight into how significant personal injury cases are defended and is able to leverage that knowledge for the benefit of his injured clients. He has been a prominent plaintiff's attorney from the very beginning, as his first trial as a plaintiff's attorney resulted in a $4.9 million dollar verdict. His legal skills and leadership in the field were unmistakable and he became a partner in 2000. He currently heads a team of lawyers, paralegals and support staff that handles cases from inception through trial.In May 2010 he was appointed as an Adjunct Professor at Brooklyn Law School. In the fall semester of each academic year since, he has taught a 16 week 2 credit course that he formulated and designed entitled "A Practical Seminar in Personal Injury and Medical Malpractice." The course is limited to second and third year law students. He has also chaired, designed, and taught courses for the New York State Bar Association and has been the Overall Planning Chair for the annual five-city Construction Site Accident Program. He is often requested to lecture national audiences for the American Bar Association and private Continuing Legal Education firms on the subjects of Construction Site Accidents, Car Accidents, Automotive Products Liability, Premises Liability and Medical Malpractice. His numerous articles have been published by the New York Law Journal the New York State Bar Journal and Medical Malpractice Law and Strategy.Howard Hershenhorn's legal acumen has been recognized by the non-legal community as well as the legal community throughout the country. He has appeared on CNN, ABC News, CBS News, WPIX and has been interviewed and quoted by The New York Times, Daily News, Newsday and New York Post.He is a member of the Board of Directors, the Medical Malpractice Committee and the Construction Accident Committee of The New York State Trial Lawyers Association. Howard is also a member of the Brooklyn Law School's Presidents Advisory Council. In 2012, he was reelected to his third term as Trustee of the Village in which he resides, and also serves his community as the Park Commissioner and as an active basketball and baseball coach.