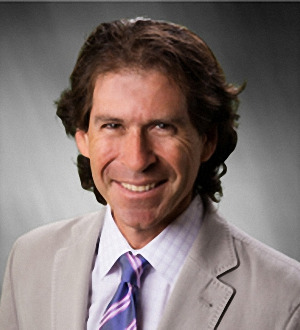 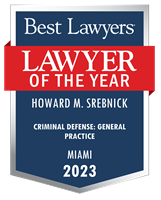 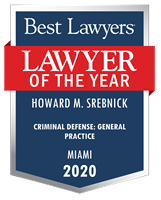 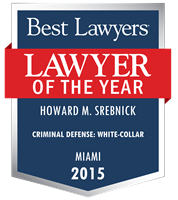 Howard Srebnick plays a major role in the Firm’s criminal division, chairs the Firm's appellate practice, and handles select high-stakes, commercial litigation. He helps set the standard for the thorough, zealous representation that our practice delivers. Selected by his peers for inclusion in The Best Lawyers in America,® clients agree "he's thorough and creative, preempts everything and leaves no stone unturned."

Chambers and Partners recognizes him as being a "great tactician and masterful trial attorney," a reputation earned through his handling of complex, high profile cases, many of which have centered on financial charges such as money laundering, racketeering, tax evasion and public corruption. Mr. Srebnick was counsel in the 6-week criminal tax fraud trial of 3-time, Indy 500 winner and Dancing with the Stars champion Helio Castroneves and his sister Katiucia, both of whom were acquitted. He was also lead trial counsel for NFL Super Bowl wide receiver Tony Martin who was acquitted of money laundering charges following a 3-week federal trial in Miami.

Mr. Srebnick has the rare distinction of having had two certiorari petitions granted by the Supreme Court of the United States. In the 2013 Term, Mr. Srebnick argued Kaley v United States, addressing the rights of criminal defendants to have an immediate hearing when the government freezes assets need to retain private counsel.

On November 10, 2015, Howard argued Luis v. United States, another challenge to asset freezes that interfere with a client’s Sixth Amendment right retain to counsel of choice. On March 30, 2016, the Supreme Court agreed with Mr. Srebnick's argument in a 5-3 decision overturning the judgment of the Eleventh Circuit. [U.S. Supreme Court Opinion]

As an attorney who focuses on identifying and preserving appellate issues, Mr. Srebnick has argued numerous cases in the state and federal courts of appeal. Mr. Srebnick was appellate counsel for the famed gentlemen’s club impresario who founded "Solid Gold," "Pure Platinum" and "Thee Dollhouse,” in his successful bid to vacate his RICO conviction. United States v. Peter, 310 F.3d 709 (11th Cir. 2002). Click the case link for Mr. Srebnick’s oral arguments in State of Florida v. Godinez and State of Florida v. Justin Bieber.

In addition to his full-time legal practice, Mr. Srebnick has been an Adjunct Professor at the University of Miami School of Law for more than fifteen years, teaching “Criminal Prosecutions and Defense Lawyering Workshop: Situational Ethics in the Adversarial System of Justice.” He has also written extensively and lectured at continuing legal education seminars across the country on ethics, trial techniques and appellate practice.