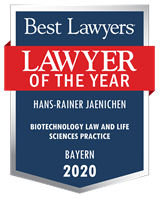 Dr. Hans-Rainer Jaenichen is a German patent attorney, a registered European patent attorney and a European Trademark and Design attorney. He has been a partner in the IP law firm of Vossius & Partner in Munich, Germany since 1990. He studied biology and holds a Ph.D. in molecular immunology.

Dr. Jaenichen's activities are primarily in the biotech and pharmaceutical area. He has frequently lectured internationally, has chaired numerous conferences and has authored many publications on biotech intellectual property. The sixth edition of his book “From Clones to Claims” on the European Patent Office's jurisdiction in the field of biotechnology in comparison to the US and Japanese practice was published together with Jürgen Meier, James F. Haley, Leslie McDonell and Yoshinori Hosoda in January 2016.

Dr. Jaenichen represents his clients at the EPO, the GPTO and before German courts. He specializes in prosecution, oppositions, revocation proceedings, infringement proceedings and compulsory license proceedings in biotechnology and on pharmaceutical inventions. He is also experienced in the strategic creation and structuring of patent portfolios.

Furthermore, together with the chemistry department, he deals with pharmaceutical and pharmacological inventions with respect to classic chemical active ingredients and also recombinant agents, sometimes identified by means of combinatorial chemistry or high throughput screenings. The department has extensive experience in the registration and enforcement of Supplementary Protection Certificates (SPCs).

Dr. Jaenichen is a supporting member of the Max-Planck-Society (Max-Planck-Gesellschaft) and is a member of Board of Trustees of the Munich Intellectual Property Law Center (MIPLC). He has been invited to the 2012 Banbury Conference on patenting genes.