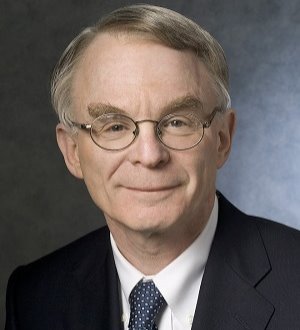 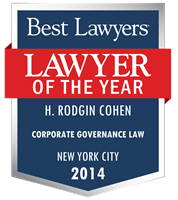 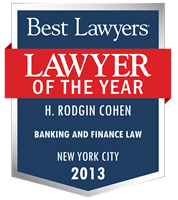 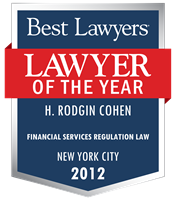 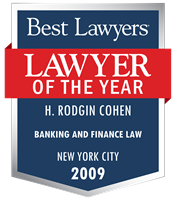 The primary focus of Rodgin Cohen’s practice is acquisition, regulatory, enforcement and securities law matters for U.S. and non-U.S. banking and other financial institutions and their trade associations, and corporate governance matters for a wide variety of organizations.

For forty years, Mr. Cohen has worked on refinancings, capital raising, restructurings and acquisitions both for companies experiencing financial distress and/or regulatory difficulties and for companies providing financing or as acquirors. During the 2008 Financial Crisis, Mr. Cohen and Sullivan & Cromwell represented, among others, Bear Stearns, Lehman, Fannie Mae, AIG, Wachovia, National City, JPMorgan (in its acquisition of WAMU), Barclays (following Lehman’s bankruptcy), MUFG (in its investment in Morgan Stanley) and Banco Popular (in its acquisition of Western and Doral). Similar representations prior to the Financial Crisis included the bank consortium in its interim financing of Franklin National, Continental Illinois, the State of Ohio during the Ohio thrift crisis, First City, First Republic, and, in the period immediately prior to the Financial Crisis, financings by or on behalf of CIC, Merrill Lynch, Citicorp, and Wachovia. Following the Financial Crisis, similar assignments involved CIT and Ally Financial.

In the acquisitions area, Mr. Cohen has been engaged in most of the major bank acquisitions in the United States, representing clients in transactions of enormous strategic significance. As an integral member of S&C’s industry-leading bank M&A practice, he has acted on 8 of the 10 largest transactions in the U.S. since 2010, including ING-Capital One, Royal Bank of Canada-City National, KeyCorp-First Niagara, BMO-Marshall Ilsley, Hudson City-M&T, Huntington-FirstMerit, CIT-OneWest, and most recently, EverBank-TIAA. Mr. Cohen’s expertise is rooted in experience, having advised on numerous notable deals historically, including Wells Fargo-Wachovia, PNC-National City, Toronto Dominion-Commerce, Bank of New York-Mellon Financial, Regions-AmSouth, Wachovia-SouthTrust, Chase-Bank One, First Union-Wachovia, U.S. Bancorp-Firstar, Wells Fargo-Norwest, Wells Fargo-First Interstate, Chemical-Chase, First Union-First Fidelity, Key-Society, NationsBank-C&S and Bank of New York-Irving. He has also served as lead counsel in a number of major acquisitions in the insurance industry, including ACE-Chubb, Anthem-WellPoint and Manulife-Hancock.

In addition, Mr. Cohen has advised a number of major foreign banks in connection with the establishment of offices in the U.S., including China Merchants Bank Co., Ltd., the first Chinese bank to receive the Federal Reserve’s approval to establish a branch in the United States since the adoption of the Foreign Bank Supervision Enhancement Act of 1991. Mr. Cohen also advised the Bank of East Asia in its sale of an 80 percent interest in its U.S. bank to CIBC. The approval was the first of its kind for a Chinese bank and paves the way for other leading Chinese banks to acquire control of depository institutions in the United States.

In addition to many of the finance services companies listed above, Mr. Cohen provides corporate governance advice to Anthem, Boeing, Textron and Travelers. He has advised various corporations in dealing with activists, including, most recently, Bank of New York/Mellon – Trian and Ally-Lion Capital. He also provides cybersecurity advice to a large number of financial and non-financial institutions, both regular clients and as special assignments.

In the securities area, Mr. Cohen worked on the first public offering in the United States by a non-U.S. bank (Barclays) and on a number of other offerings in the United States by non-U.S. banks. He has also worked on public offerings by BancOne, Bank of New York, Chase, Chemical, Citicorp, Continental Illinois, First Bank System, First Fidelity, First Interstate, First Union, KeyCorp, MBNA, Mellon, Morgan Guaranty, Norwest, Republic New York, Security Pacific, Shawmut and Wachovia. He also worked on major capital-raising activities by a number of major financial institutions, preceding and following the financial crisis.

87 The Best Lawyers in America® awards

32 Best Lawyers: Ones to Watch in America awards