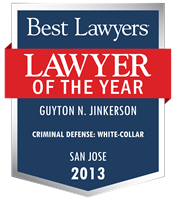 He also has extensive experience in civil litigation and professional licensing proceedings which have emanated from criminal investigations.

He has been listed in Best Lawyers in America in the categories of Criminal Defense, White Collar crimes and General crimes since 1987.

He has been recognized by Super Lawyers in the area of White Collar Crimes since 2005.

He has been named as one of the Top One Hundred Trial Lawyers in California since 2007 by the National Trial Lawyers Association.

He has been rated av by Martindale-Hubbell for more than thirty five years.