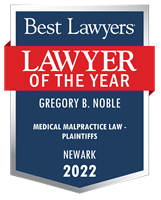 Gregory Noble is a partner at the law firm of O’Connor, Parsons, Lane & Noble, LLC. Mr. Noble specializes civil trial practice, with a significant emphasis in plaintiffs’ employment law and medical malpractice. In the realm of employment law, he has represented plaintiffs in cases involving hostile work environments, discrimination and wrongful termination. In the area of medical malpractice, he has represented clients in cases regarding medical errors, personal injury and wrongful death.

Mr. Noble’s representation has resulted in numerous multi-million dollar verdicts and settlements for his clients including a jury verdict of $22.6 million in a high profile case involving a hostile work environment for a gay employee of a trucking company, believed to be the largest verdict for a single plaintiff in an employment discrimination case in New Jersey’s history. In addition, among many others, he obtained a $3.9 million medical malpractice verdict wherein our client received a negligent recommendation for an unnecessary triple bypass heart surgery.

He was recently admitted as a member of the American Board of Trial Attorneys (ABOTA), and was also recognized among the Best Lawyers of America in the 2015 edition of this legal publication. He received his Bachelor of Arts degree from Rutgers College (1995) and his Juris Doctorate degree from Rutgers School of Law — Newark (1998).