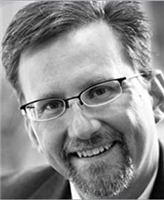 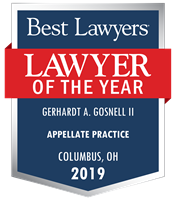 Gage has represented clients in a variety of matters in state and federal trial courts throughout Ohio, the Ohio courts of appeals, the Ohio Supreme Court, the U.S. Court of Appeals for the Sixth Circuit, and the United States Supreme Court. Gage has a practice focused on complex commercial and tort litigation, with an emphasis in appellate advocacy. Gage is a Best Lawyers® for appellate Advocacy, an Ohio Super Lawyer® and AV Preeminent® rated lawyer from Martindale Hubble.

In 2012, Gage was victorious in the Ohio Supreme Court on behalf of the Knox County Commissioners and the County Risk Sharing Authority, in a case in which the Ohio Supreme Court held that the Ohio Constitution allows the use of motor vehicle and gas tax (MVGT) revenues to pay the portion of the county’s insurance premium covering the county engineer’s highway department. The Court’s unanimous (7-0) decision reversed the court of appeals and effectively overruled the results of a prior 2006 decision. In that same year, Gage was part of the legal team that won a hard-fought appeal in the Sixth Circuit U.S. Court of Appeals in favor of Columbus-based shoe retailer, DSW Inc — a victory that resulted in an award of over $7.1 million against National Union Fire Insurance Company of Pittsburgh, PA. 2009, Gage was the lead counsel representing the Ohio Grocers Association in the Ohio Supreme Court in a constitutional challenge to Ohio’s commercial activities tax, a case Columbus Business First called “one of [the court's] most important cases of the year.” In 2010, Gage represented retail natural gas suppliers in the United States Supreme Court in a constitutional challenge to Ohio’s taxation of natural gas sales. Gage has represented numerous clients in amicus briefs to the Ohio Supreme Court including three former Ohio attorneys general in an amicus brief to the Ohio Supreme Court in 2010 relating to the power and authority of the attorney general to represent the state of Ohio in matters pending before the courts. Prior to joining James E. Arnold & Associates, LPA in May 2011, Gage was a partner at the Columbus law firm of Chester Willcox & Saxbe LLP in their litigation section. He began his legal career in 1995, when he joined the Columbus office of Jones Day. Gage served four years as a judicial law clerk for Judge Cynthia Lazarus on the Ohio Tenth District Court of Appeals.