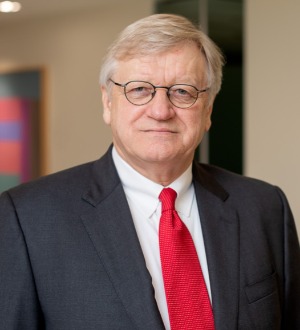 Gary Parsons handles trials and appeals in state and federal courts throughout North Carolina and adjoining states. He has represented clients in the energy, pharmaceutical, automotive, internet information, healthcare, communications and insurance industries.

When Gary was voted the Top Litigation Attorney in North Carolina in a 2005 poll of North Carolina lawyers conducted by Business North Carolina Magazine, the then-President of the North Carolina Bar Association told the publication “If I were in trouble, he is the lawyer I would call for help.”

"Gary Parsons is a superstar."

"Gary Parsons is a skilled litigator, well respected by both his peers and his clients."

"Gary Parsons is straightforward, hardworking, and responsive to the needs of the client. Integrity and determination are at the top of the list of characteristics that would describe Gary Parsons."

"Gary Parsons is very thorough. His preparation is a hallmark. He has excellent courtroom skills."

"Gary Parsons is hardworking and thorough. We will receive a same-day response to a question or concern. He is great to work with. Even something that is routine, Gary takes time to answer and respond. Gary is one of kind -- the best kind."

"I have had the great pleasure to work with Attorney Gary Parsons for more than 25 years. He is one of the finest attorneys I have ever known. He regularly defends other attorneys in legal malpractice cases as well as assists plaintiff attorneys in claims repair activities to keep their case from being dismissed due to some civil procedure issue. His firm is very efficient and provides immediate attention to any request. Gary is always completely prepared and professional when he is in court. He represents his client with courtesy and civility and extends that respect to everyone involved. Gary is very well-known to both the bench and bar, and everyone holds him in high regard in the legal community. I have never known a finer attorney. I would recommend Gary in any complicated civil matter or commercial litigation."

"What makes a client want to retain any attorney in hundreds of cases over 30 years? In my situation, I retain Gary Parsons because I have confidence that he has the expertise to handle complex litigation in a timely, effective, and professional manner. I know of no one better at reducing factually intensive cases down to its basic elements and then succinctly addressing each complex issue in clear and easily understandable terms. He knows how to strengthen his argument using a better choice of words, than with more words. He is known and respected by the bench and bar, and appreciated by his clients."

"Gary Parsons is a southern gentleman in all aspects, but he is a warrior with class in the courtroom."

"Experienced, practical, and thorough, Gary Parsons is among the very best lawyers in North Carolina for sophisticated courtroom work. I am very pleased to have Gary working with us. If you have a high exposure tort case with a high probability of going to trial, Gary Parsons is your man."

"I have worked with Gary in my roles as in-house counsel and in claims management in the insurance industry for more than 20 years. While Gary is very well liked and well respected among his peers, what is critical from a client's perspective is his easy accessibility, the depth and breadth of his knowledge of insurance law, and his ability to quickly identify the strengths and weaknesses of a particular case and develop a winning game plan for his client. Gary is one of the most effective litigators with whom I have ever had the privilege to work. He can be an aggressive advocate when warranted, always keeping the best interest of his client as his primary focus."

Browse all articles
Contact Gary S. Parsons
If you would like this lawyer to contact you directly in regards to a legal matter, please fill in the relative information below. The lawyer will then be sent your inquiry.
Your message was sent successfully!
Legal Disclaimer: Any information sent to Best Lawyers® or referred to a lawyer listed in Best Lawyers® via Internet e-mail or through the Best Lawyers® Web site is not secure and is done so on a non-confidential basis. Communication with Best Lawyers® or an Lawyer listed in Best Lawyers® via Internet e-mail through this site does not constitute or create a lawyer-client relationship. Best Lawyers® does not necessarily endorse, and is not responsible for, any third-party content that may be accessed through this website.
Add Comment
Your comment was saved successfully!
Thank you for your feedback.