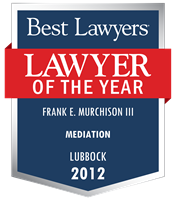 Dirk Murchison is Board Certified in Civil Trial Law & Personal Injury Trial Law Texas Board of Legal Specialization and is licensed in New Mexico and Texas.

Frank E. “Dirk” Murchison earned his BBA in Finance from Texas Tech University in 1971 and his J.D. from Texas Tech University School of Law in 1974. From 1974 to 2001, he tried over 125 cases to jury verdict as lead counsel. Since 2001 his practice has been limited to arbitration and mediation with emphasis on catastrophic personal injury, complex commercial and sexual abuse cases. In 2015 – 2016 Dirk Murchison successfully mediated the highly publicized Gallup NM – AZ Catholic Diocese sexual abuse case (156 claimants). In his career he has mediated or arbitrated over 1300 cases, including over 300 clergy sexual abuse claims successfully mediated.

Practice limited to Arbitration and Mediation of serious personal injury, complex commercial, employment and sexual abuse cases. In his career he has mediated or arbitrated over 1300 cases, including over 300 clergy sexual abuse claims successfully mediated. 1974-2001 over 125 cases tried to jury verdict as lead council.