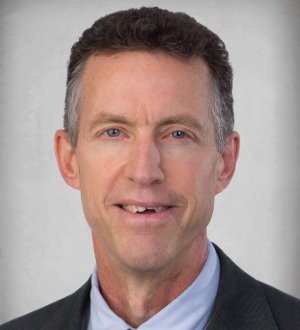 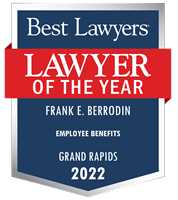 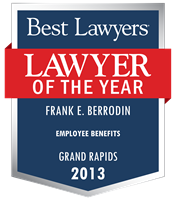 Frank E. Berrodin is a Member of the firm and has been practicing law since 1987. Mr. Berrodin’s practice is devoted primarily to employee benefit and executive compensation issues, particularly the design, drafting and administration of qualified and non-qualified retirement and welfare plans for both taxable and tax-exempt entities.

A significant portion of Mr. Berrodin’s practice involves the resolution of disputes that arise between employers and employees regarding the benefits available under various plans, as well as disputes between employers and certain government agencies that regulate such plans (such as the IRS and Department of Labor).

Mr. Berrodin has also worked with a number of employers who have discovered errors or problems with their qualified retirement plans to help them determine the best method for correcting the problems. In many cases, this has involved working with the Internal Revenue Service, the Department of Labor and other federal agencies to minimize penalties and retain the tax-qualified status of a plan.

Mr. Berrodin has also assisted employment lawyers in their negotiations regarding multiple-employer union pension plans. For example, Mr. Berrodin has provided analysis and cost comparisons of agreeing to increased contributions to a multi-employer pension plan (which includes an increased share of withdrawal liability) as opposed to having the employer establish its own retirement plan.

With respect to non-qualified plans, Mr. Berrodin has been retained by company owners and executives to design a variety of compensation packages, including deferred compensation, phantom stock, restricted stock, stock options, and split dollar life insurance plans. This includes advising employers how to minimize the impact of the Employee Retirement Income Security Act of 1974 (ERISA) on the plan and design and administer the plan in accordance with ERISA and other applicable laws.

In addition, Mr. Berrodin has been retained in merger and acquisition matters relating to the spinoff or merger of plans and determining the value of benefits afforded to former key executives. As an example, Mr. Berrodin assisted a large hospital system with the acquisition of the employee benefit plans of another large hospital it acquired including a frozen pension plan and several defined contribution plans. In another case, he represented the executives of an acquired company in an arbitration involving the dollar value of the benefit package the executives were to receive. He also represented a group of over 15 physicians regarding the spinoff of individual pension plans from the large underfunded pension plan of a defunct medical clinic.

Finally, Mr. Berrodin has worked with both plaintiff and defense attorneys regarding ERISA and contractual claims for benefits. Mr. Berrodin has extensive experience in determining the value of lost benefits (both past and future) and explaining the operation of various employee benefit plans and the calculation of amounts payable under the plans, for judges and arbitrators who are frequently unfamiliar with new or unusual plan designs.

"Frank Berrodin is a great overall ERISA attorney and he is particularly in tune with retirement plans. Frank is incredibly responsive, which has helped our company successfully achieve more than a few acquisitions and divestitures on accelerated timelines. We appreciate that Frank clearly explains each available option, as well as any risks associated with each option. Neither too conservative nor too aggressive, he consistently provides us with the information we need to make the best decisions for our organization."