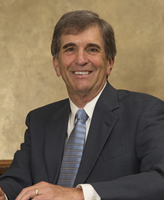 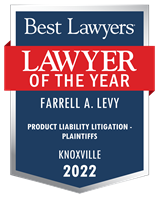 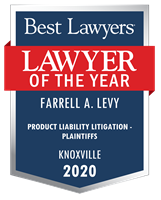 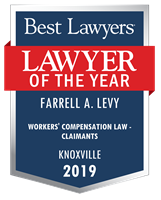 Mr. Levy has been practicing law for more than 40 years. He is certified as a Civil Trial Specialist by the Tennessee Commission on Continuing Legal Education and Specialization. He is also certified by the National Board of Trial Advocacy in Civil Trial Advocacy.He is certified as a Civil Pretrial Practice Advocate by the National Board of Civil Pretrial Practice Advocacy. Mr. Levy has been selected as a Super Lawyer in personal injury in the Mid-South Super Lawyers magazine for every year since 2006.. He has been selected as Fellow in the Litigation Counsel of America which is a highly selective honorary society. His practice areas include civil litigation, personal injury, products liability, workers’ compensation and aviation litigation. Currently, Mr. Levy handles cases primarily for plaintiffs. He has successfully pursued numerous cases for clients with serious personal injury, including a products liability case in which he obtained a verdict of $2,825,000.00 for his clients. Mr. Levy has been selected as a Top 100 Trial Lawyer in Tennessee by the National Trial Lawyers Association.In 2012, he was inducted as a Fellow of the Knoxville Bar Foundation.He was selected as Top Attorney in Wrongful Death Plaintiff Cases in the 2012 Cityview Magazine and a Top Attorney in Aviation and Admiralty in 2013 and 2014. Mr. Levy has been selected as one of Best Attorneys in America in the area of plaintiff’s products liability cases for since 2017.Mr. Levy received his law degree from the University of Tennessee where he was a member of the Tennessee Law Review. Even in law school, Mr. Levy was interested in Products Liability and authored “Products Liability- Bystander Recovery in Strict Liability” which was published in the Tennessee Law Review. He received his undergraduate degree with honors from the University of Tennessee, and was chosen as the most outstanding senior major in marketing.Learn more about Mr. Levy being Board CertifiedOn numerous occasions, Mr. Levy has been asked to speak at legal education seminars. Mr. Levy was the program chair and speaker at a Tennessee Bar Association seminar entitled, “How to in $1,000,000 Jury Verdicts by Those Who’ve Done It.” He has spoken at the Tennessee Evidence Workshop several times and has lectured on other trial practice topics such as jury selection and successfully trying a personal injury case. He has also lectured at numerous bar-sponsored seminars concerning the use of computer technology to improve law office efficiency. Mr. Levy has served on several local and state bar association committees.Mr. Levy’s trial techniques in Products Liability cases have been the subject of legal journals. His work in products liability cases lead to a national legal publication reviewing the successful tactics he employed in the case. The injury that Mr. Levy’s client sustained was caused by a defective airless spray gun. The deposition of the treating plastic surgeon taken by Mr. Levy was the subject of an instructive article for attorneys. This article points out that the deposition taken by Mr. Levy is a beautiful example of how to take a deposition. The analysis was published by Matthew Bender in the February, 1984 issue of Trauma authored by Marshall Houts, J.D. and is entitled: “Presenting The Medical Evidence: Converting The Deposition Into A Trial Brief Of The Facts.” In another published article which can be read at http://www.seak.com, Mr. Levy discusses his techniques in presenting expert witness proof in a Products Liability case involving a school bus.Mr. Levy is married and the father of two daughters. His community activities include serving as a founding board member of the Dream Connection, Inc., an organization that helps fulfill dreams” of children who have life-threatening illnesses. Since its foundation in 1985, the Dream Connection has fulfilled the dreams of hundreds of children in East Tennessee. Mr. Levy previously served as president and treasurer of the Dream Connection. He also served two terms as president of Fox Den Country Club.He is currently a member of the Farragut Rotary Cluband a multiple Paul Harris Fellow. For many years, Mr. Levy served as the chairman of the Rotary Foundation Committee for his local club. Mr. Levy has been a licensed pilot since 1976, and has handled several aviation litigation cases.Mr. Levy has served as a volunteer ombudsman for Employer Support of the Guard and Reserve (ESGR).In that role, Mr. Levy assists Guard and Reserve members to insure that they are treated fairly by their employers when their military obligations interfere with their civil employment.In order to become an ombudsman, it is necessary for an attorney to attend classes sponsored by the National Committee for the Employer Support of the Guard and Reserve.

Selected as Super Lawyer in plaintiff's personal injury since 2006

Fellow in the Litigation Counsel of America

Selected as a Top Attorney in Knoxville by Cityview Magazine

Fellow of the Knoxville Bar Association