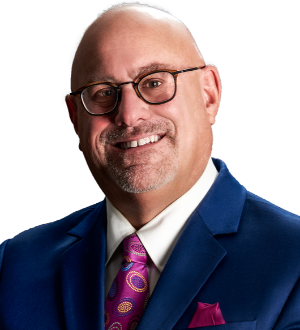 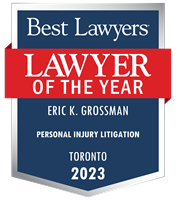 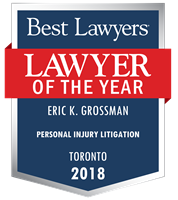 Eric was called to the Ontario Bar in 1989 and has been certified as a Specialist in Civil Litigation by the Law Society of Upper Canada since 1999. Eric has been named by Best Lawyers International as Lawyer of the Year, Personal Injury Litigation, Toronto, for 2018, and is recognized annually as a Best Lawyer in Canada in personal injury and insurance law by that organization. Eric continues to be recognized by Lexpert as a leading practitioner in personal injury law. He has attained an AV Preeminent rating from Martindale-Hubbell, peer rated for the highest level of professional excellence.

His entire legal career has been spent acting for insurers in litigation matters, both in defence and in subrogation matters, for a number of property and casualty insurers.Eric is the 2019 recipient of the Canadian Defence Lawyers (CDL) Lee Samis Award for distinguished service, named for the founding President of the CDL. The award recognizes Eric's exceptional contributions and achievements over his career to the legal profession in general, to the development of the law of insurance in Canada including through jurisprudence, and to the positive impact he has make to the CDL, the legal profession, and the insurance industry.

Eric and his partners founded the firm Zarek Taylor Grossman Hanrahan LLP in 1997, as a six lawyer firm, and today, is 40+ lawyers strong. ZTGH was recognized by Canadian Lawyer Magazine as one of Canada’s top ten insurance defence boutiques.

As the author of the Ontario Accident Benefits Case Summaries, (formerly CCH and now Lexis Nexis published) Eric has developed an expertise in this area of auto insurance law which has been and continues to be recognized by members of the insurance bar, his clients, other professionals that service the industry and other insurers. Eric is also on the Advisory Board to WestlawNextCanada Litigator’s “Personal Injury Practical Guidance”.Eric has appeared as counsel at mediations, pre-arbitration hearings, arbitrations and appeals before the Financial Services Commission of Ontario and on private arbitrations on countless occasions. He has also appeared at the License Appeals Tribunal of Ontario. He has appeared in defence of these claims on judicial review at Divisional Court, Court of Appeal, and was fortunate to have won a decision at the Supreme Court of Canada, securing a decision from the Bench at the time of oral hearing, in Zurich v Chubb[2015] 2 SCR 134, in April 2015.

Eric has been called upon to speak, make presentations and lead workshops at Advocates' Society, Ontario Bar Association, Metropolitan Toronto Lawyers’ Association, Osgoode Hall Law School, and other professional associations regarding the law and mechanics of the OMPP, Bill 164, Bill 59 and Bill 198. He has chaired presentations and training sessions for the adjusting and supervisory staff of the firm’s insurance clients regarding the mechanics, practical difficulties and the law in respect of the OMPP, Bill 164, Bill 59 and Bill 198.

Eric is a past Chair of the Bar-Dispute Resolution Group Forum of the Financial Services Commission of Ontario. He is also a past Chair of the Accident Benefits Section of the Canadian Defence Lawyers organization. He is on the Advisory Committee to the Superintendent of Insurance at FSCO.

Eric has been called upon to make submissions to the government on various contemplated and draft legislative changes and continues to do so when invited, both personally, and on behalf of The Advocates’ Society and Canadian Defence Lawyers. He has served on an advisory committee to the Ontario government on the Auto Insurance Dispute Resolution System, in its mandate to transition from FSCO to the LAT

See all of Eric's decisions